PRESS RELEASE -The High Point Rockers, along with Truist announced today that the teams home stadium of BB&T Point will officially be rebranded as Truist Point this summer. The transition comes as a contribution of its naming rights partnership with the independent Atlantic League franchise.

END_OF_DOCUMENT_TOKEN_TO_BE_REPLACED

PRESS RELEASE – Minor League Baseball™ (MiLB™) today announced STOUFFER’S®, a leader in frozen prepared entrées, as the “Official Macaroni & Cheese” of MiLB, as well as the “Official Lasagna” and “Official Frozen Prepared Meals” of MiLB. The announcement comes as part of a new, multiyear strategic partnership celebrating communities and providing family-friendly experiences — both central values to the STOUFFER’S and MiLB brands.

END_OF_DOCUMENT_TOKEN_TO_BE_REPLACED 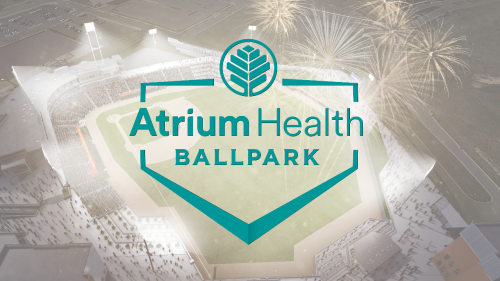 END_OF_DOCUMENT_TOKEN_TO_BE_REPLACED

PRESS RELEASE – Jacksonville’s longest tenured professional sports franchise has entered into an agreement to play in a stadium bearing the name of one of Jacksonville’s longest continually-operating credit unions. The Jacksonville Jumbo Shrimp and 121 Financial Credit Union (pronounced “One to One”) have agreed to terms on a long-term naming rights agreement for the ballpark, pending Jacksonville City Council approval expected ahead of the 2020 season.

END_OF_DOCUMENT_TOKEN_TO_BE_REPLACED

The Milwaukee Brewers home ballpark will have a new name next year after a 20-year deal with Miller comes to an end.  American Family Insurance announced Tuesday evening that Miller Park will become American Family Field next Jan. 1.  A new logo and other branding elements will be revealed later this year.  Read more here and here.

The Atlanta Braves officially bid adieu to the SunTrust Park era on Tuesday morning, when it was announced their stadium will now be known as Truist Park.  Read more and watch video here.

PRESS RELEASE – The spring training home of the New York Mets and regular-season home of the St. Lucie Mets, New York’s Advanced-A minor league affiliate, will have a new name next season. The venue, formerly known as First Data Field, will be called Clover Park beginning in February 2020. This change follows the 2019 acquisition of First Data by Fiserv, a leading global provider of payments and financial services technology. END_OF_DOCUMENT_TOKEN_TO_BE_REPLACED

A legal dispute about naming rights for a baseball stadium has temporarily left it without a moniker.  The owners of the Milwaukee Milkmen (Independent Professional, American Association), said this week they settled a lawsuit with their ballpark’s naming rights sponsor.  Read more here.

PRESS RELEASE – The Prospect League today announced it has entered into a new five-year (2020-2024) agreement with international brand Under Armour as its official on-field uniform. All Under Armour apparel, uniforms, and other related merchandise will be supplied by Kollege Town Sports, a Madison, Wisconsin-based corporation. Kollege Town Sports will also initiate two separate online stores for each team, which is a significant first. 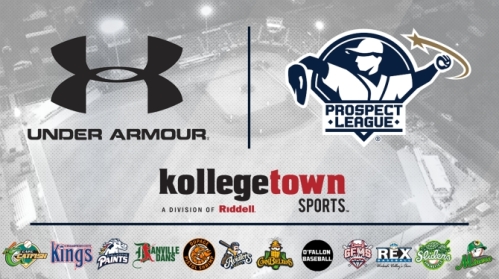 END_OF_DOCUMENT_TOKEN_TO_BE_REPLACED

The company for which Routine Field is named is suing the developer of that Franklin baseball park, claiming it is using its name and logo without approval.  Franklin-based baseball apparel company Routine Baseball LLC says it approved a nonbinding letter of intent to sign a naming rights contract with Ballpark Commons LLC, which operates the stadium.  Read more here.  View ballpark photos here.

Charles H. Braun Stadium, home of the University of Evansville Purple Aces baseball team for 20 years, is set to receive a major facelift and a new name.  Read more here. 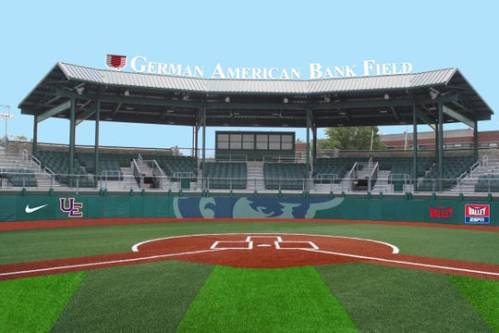 The amount of money the city of Joliet (IL) gets from the naming rights agreement with DuPage Medical Group for the city-owned baseball stadium, home of the Joliet Slammers (Independent Professional, Frontier League), has not been disclosed, even to City Council members.   City officials and council members also are concerned that the new DuPage Medical Group Field name does not take into account the Joliet Route 66 Stadium name given to the stadium by ordinance in 2017.  Read more here.

In case you missed it, the Portland Pickles (Summer Collegiate, West Coast League) announced last week the first-ever Cannabidiol (CBD) sponsorship deal in baseball, when it inked a two-year partnership with Lazarus Naturals, a CBD brand headquartered in Portland (OR).  CBD is a compound that is part of the cannabis plant that is minus the THC compound that is known to get individuals intoxicated.  Read more here.

The home of the Joliet Slammers (Independent Professional, Frontier League) in Joliet (IL) is reportedly getting a new name.  According to a source, the ballpark will be known as DuPage Medical Group Field at Route 66 Stadium.  An official announcement is expected soon.  Read more here.

PRESS RELEASE – The San Jose Giants announced today a three-year naming rights agreement with newly re-branded Excite Credit Union. As of today, fans will be walk through the front gates of Excite Ballpark, Home of the San Jose Giants. The naming rights deal highlights an expanded partnership between the two organizations and ushers in an exciting new era of baseball in San Jose.

END_OF_DOCUMENT_TOKEN_TO_BE_REPLACED

It is baseball's #OpeningDay! Here are views of @MLB stadiums and their host cities as captured by our @NASA_Astronauts on the International @Space_Station, located 250 miles above Earth. Check out this unique perspective: pic.twitter.com/S7sHHp7Pkb

END_OF_DOCUMENT_TOKEN_TO_BE_REPLACED

T-Mobile has a 25-year contract to have its name on the stadium, which had been known as Safeco Field since 1999. View photos here and here.

One way or another, it looks like the Atlanta Braves are going to be playing in a park that will not be named SunTrust. The $66 billion acquisition of SunTrust by BB&T Corp. means the two huge banks will be merged into one company under a new name, which has yet to be decided.  Read more here.

Fayetteville’s Ballpark Plaza Gets a Name

The plaza in front of the new minor league baseball stadium will be named for late Fayetteville (NC) Mayor Bill Hurley, who was an avid baseball fan and is credited with a downtown cleanup that led to the new stadium.  Read more here.

The University of Arkansas board of trustees will vote this week on whether to modify the name of the Razorbacks’ baseball stadium from Baum Stadium to Baum-Walker Stadium.  The request comes after the Willard & Pat Walker Charitable Foundation pledged a $5 million lead gift toward the construction of a $25-million, 40,000-square-foot operations center on the stadium grounds.  Read more here.

The Brewers and @amfam have announced a long-term agreement which includes the naming rights for Miller Park beginning in 2021 and continuing for 15 years. The future name and branding elements for the stadium will be announced at a later date. 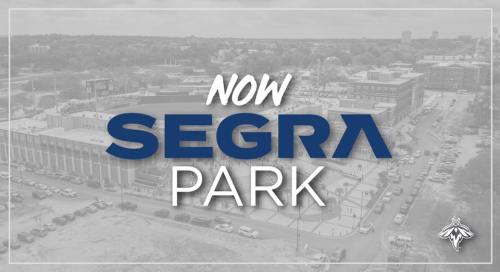 The home of the San Francisco Giants will now be known as Oracle Park.  The team on Thursday will announce a 20-year agreement with the Redwood City technology company to affix its name to their waterfront ballpark.  Read more here.

The Seattle Mariners and Bellevue (WA)-based telecommunications giant T-Mobile announced a 25-year ballpark naming-rights partnership that will begin in January and run through December 2043.  Per Forbes, the deal is worth $87.5 million.  The former Safeco Field will now be known as T-Mobile Park.  Read more here.

After a delay, a renegotiation, some public outcry and general local politics, the Washington State Major League Baseball Stadium Public Facilities District (PFD) Board and Seattle Mariners have reached a final agreement on a new 25-year ballpark lease for the venue formerly known as Safeco Field.  With the lease finalized, the Mariners are expected to announce a stadium naming rights deal — rumored to be with T-Mobile — in the coming days.  Read more here.

The new spring training home of the Atlanta Braves has its name: CoolToday Park. On Tuesday, the Atlanta Braves announced a partnership with CoolToday for the naming rights of the facility, slated to host its first game on Sunday, March 24, with the Braves taking on the Tampa Bay Rays.  Read more here.

Safeco to T-Mobile in Seattle?

When the 2019 MLB regular season gets underway, the Seattle Mariners will be playing in a ballpark under a new name.  While it has not been announced, Forbes is reporting that T-Mobile will be the new naming rights partner of the Mariners beginning next year.  Read more here.

The Greensboro Grasshoppers’ (Single-A, South Atlantic League) downtown ballpark will keep its First National Bank Field name through at least the 2026 season. The Hoppers and FNB Corp. agreed to a five-year extension of their existing naming rights deal, which runs through 2021.  Read more here.

Two of Western New York’s most iconic organizations are now teammates at the ballpark as the Buffalo Bisons (Triple-A, International League) and the Sahlen Packing Company today announced the signing of a 10-year naming rights agreement for the ballpark home of the Herd to be called “Sahlen Field.”  Read more here.

ROC Ventures has announced that Routine Baseball has received exclusive naming rights for the new stadium located at Ballpark Commons.  The ballpark will be known as Routine Field.  Routine Baseball is an apparel brand dedicated to baseball and the lifestyle surrounding it.  Read more here. 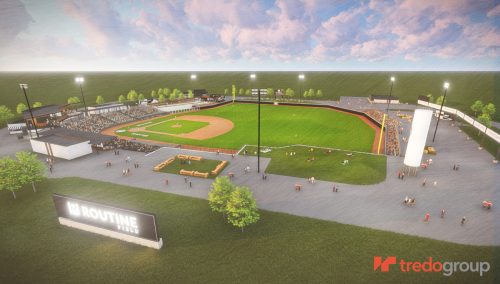 Costs Will Keep Ballpark from Being Named After Legend

A recently-published column recommends the Buffalo Bisons (Triple-A, International League), upon the conclusion of its current stadium naming rights agreement, rebrand the downtown ballpark in honor of one of its legendary players.  Read more here.

Get ready for a new name to adorn the home of the Buffalo Bisons (Triple-A, International League) after this season.  The Coca-Cola Bottling Company is not renewing its naming rights deal on Coca-Cola Field and the city will be putting the name up for bid to determine the park’s fifth moniker since it opened in 1988.  Read more here.