PRESS RELEASE – That’s not a combination you hear talked about often but that’s exactly the theme the Joliet Slammers capture in their first commercial, which will air starting this Friday. 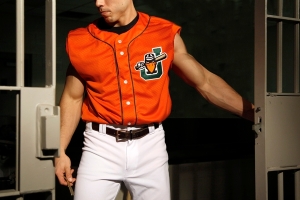 The 30-second teaser promotes the Slammers as a new, different brand of professional baseball. It will air in the Joliet, Frankfort, Kankakee, Orland Park, and Southwest suburban zones of Comcast Cable. The spot can be seen on TBS, ESPN, Nickelodeon, Cartoon Network, ABC Family and Comcast SportsNet Chicago. In addition, the Slammers are serving as the local sponsor of the NBA playoffs on TNT. Satellite subscribers will see the commercial on CSN.

“This commercial is unlike any baseball advertisement you’ve ever seen,” Director of Marketing and Public Relations Sarah Eichenberger said. “The show we’re putting on at Silver Cross Field this year and beyond is not only great entertainment but also uniquely “Joliet” in its flavor.”

The Joliet area is home to two maximum security penitentiaries, the Collins Street Prison which is now closed and the Stateville Prison. Collins Street Prison was used in many Hollywood productions including The Blues Brothers and the TV show Prison Break. The Slammers are embracing the city’s history in their name, logo, and now their first commercial.

The commercial begins with a black and white shot of a prison. As the image shakes, it cuts to a shadowy figure walking through the prison. Atmospheric music plays underneath as the stick he’s holding clangs against the prison bars. At the end the music gets louder as the camera tilts up to reveal the “prison guard” is actually a Slammers baseball player in full uniform pounding a bat into his hand as he stares at the camera. It ends with a full screen telling fans about Opening Weekend, which runs May 19-21.

Fans of the Slammers have already seen the commercial as the team released it yesterday on their YouTube, Facebook, and Twitter pages. The promo will run through Opening Day and is the first of many television commercials the Slammers are running to promote their inaugural season.