Saints Bring Their Distinctive Brand of Entertainment to Triple-A

PRESS RELEASE – For 28 years the St. Paul Saints introduced the baseball world to pigs delivering baseballs to umpires, nuns giving massages to fans, and promotions poking fun at current events, politics, the baseball industry, and oftentimes themselves, all while being an Independent Professional Baseball Club. The Saints “Fun is Good” motto is about to enter center stage on a completely different level. The Saints, in a partnership with the Minnesota Twins, have received an invitation to become the top tier, Triple-A, Minor League affiliate of their Twin Cities neighbor beginning in the 2021 season.

END_OF_DOCUMENT_TOKEN_TO_BE_REPLACED

The Staten Island Yankees, the former short-season Class A affiliate of the New York Yankees, announced Thursday that the organization is ceasing operations and filed a lawsuit against its former parent club – as well as Major League Baseball.  Read more here.

The Orem Owlz (Independent Professional, Pioneer League) have announced that they are relocating from their home in Orem (UT) to the Future Legends Complex in Windsor (CO).  They will be renamed the Northern Colorado (NoCo) Owlz in 2021.  Read more here.

PRESS RELEASE – Major League Baseball, Prep Baseball Report (PBR), and five founding members today announced the formation of the MLB Draft League, which will become the first league in the country focused on top prospects who are eligible to be drafted by MLB Clubs that summer.

END_OF_DOCUMENT_TOKEN_TO_BE_REPLACED

Major League Cricket has leased a 5,400-seat minor league baseball stadium in Grand Prairie, Texas, and will turn the venue into a cricket stadium for the league’s inaugural 2022 season.  Read more here.  The ballpark was the home of the now-defunct Texas/Grand Prairie AirHogs (Independent Professional, American Association).  Read more here.

The Minnesota Twins are looking for a new top farm team, after officially informing the Rochester Red Wings (Triple-A, International League) that they are out.  The St. Paul Saints (Independent Professional, American Association) are the targeted replacement.  Read more here.

PRESS RELEASE – The Frontier League has announced the granting of an expansion membership to Ottawa, Ontario, to begin play in the 2021 season. Ottawa becomes the 15th Frontier League team and the third in Canada, joining the Quebec Capitales and Trois-Rivieres Aigles. 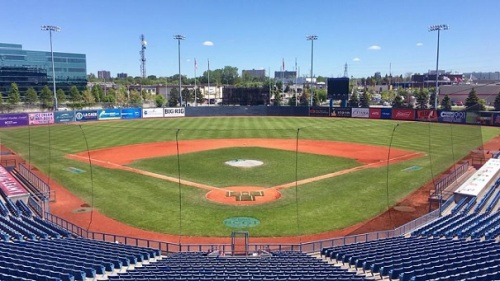 END_OF_DOCUMENT_TOKEN_TO_BE_REPLACED

PRESS RELEASE – Major League Baseball (MLB) announced today that it has named the Atlantic League of Professional Baseball (ALPB) its first “Partner League”. As a Partner League, ALPB will meet regularly with MLB to discuss joint marketing and promotional opportunities, including the leagues’ shared goal of providing baseball to communities throughout the United States. END_OF_DOCUMENT_TOKEN_TO_BE_REPLACED

PRESS RELEASE – The City of Lafayette and Lafayette Board of Parks & Recreation are pleased to announce that the Lafayette Aviators have been named the baseball team to play in Loeb Stadium. The announcement was made during a Park Board meeting at the Loeb Stadium construction site.

END_OF_DOCUMENT_TOKEN_TO_BE_REPLACED

PRESS RELEASE – Minor League Baseball™ (MiLB™) issued the following statement regarding a pair of articles published in recent weeks regarding the state of the Professional Baseball Agreement (PBA): END_OF_DOCUMENT_TOKEN_TO_BE_REPLACED

Three months after becoming sole owners of Schaumburg Boomers Stadium, village officials are poised tonight to enact revisions to the baseball team’s lease agreement they say are in the best interests of both parties.  Read more here.

Millikin University and the Prospect League (Summer Collegiate) could not come to an agreement to bring a franchise to the new Workman Family Baseball Field for the summer of 2020.  A stumbling block to securing an agreement was reportedly over the length of the proposed 10-year contract between the potential team owners and the university.  Read more here.  View original renderings here.

The Ruston (LA)-based Louisiana Teach University Bulldogs baseball team is scheduled to play in nine conference games at Smith-Wills Stadium in Jackson (MS) in 2020.  The team was forced to move out of their home ballpark because of an  April 2019 tornado.  Smith-Wills has narrowly avoided demolition and was leased to a new sports management group last year.  Read more and view photo here.

The Florida Fire Frogs (Single-A, Florida State League) finally have a (temporary) home.  Minor League Baseball has approved the Fire Frogs to play at the Atlanta Braves’ new North Port facility for the 2020 season.  The decision gives some finality to a question that hung over the team all offseason.  Read more here.

The Alameda County (CA) Board of Supervisors voted Monday to sell its ownership in the Coliseum complex to the Oakland A’s, capping a years-long effort by the county to get out of the sports business and all but securing the baseball team’s future in the East Bay.  Read more here.

The Anaheim City Council on Friday approved a $325 million sale of Angel Stadium.  The decision is one of a three-step proposal that would see the Angels play in Anaheim through 2050.  It also includes potential development around the stadium and community benefits.  Read more here.

MLB Threats Take PBA Negotiations with MiLB to the Brink

Major League Baseball and Minor League Baseball shared the same Las Vegas hotel at last year’s Winter Meetings. A year later, the MLB contingent was at the Grand Hyatt, while MiLB was housed at a Hilton down the road. Physically, the two groups were separated by only a mile. After a few rounds of negotiations—both in conference rooms and in the media—the sides appear much farther apart.  Read more from Baseball America here.

PRESS RELEASE – During this week’s Baseball Winter Meetings in San Diego, representatives from Minor League Baseball (MiLB) and Major League Baseball (MLB) engaged in formal and informal discussions regarding the Professional Baseball Agreement (PBA) that were cordial and productive. Following those meetings, MLB has repeatedly and inaccurately stated the position of MiLB with respect to several key areas under consideration in the PBA negotiations. To correct the record, Minor League Baseball’s positions on the key areas are as follows:  Read more here.

A big vote is happening today for the future of Hank Aaron Stadium in Mobile (AL).  Since the Mobile BayBears (Double-A, Southern League) packed their bags and moved to a new home in North Alabama, questions have swirled about the future of this historic ballpark.  Read more and watch news report here.

MLB Proposes Radical Restructuring of Farm System, Would Eliminate 40 Teams and Cut Draft in Half

The Professional Baseball Agreement (PBA) between Major League Baseball and minor league teams expires at the end of the 2020 season.  But if a new MLB proposal were to become reality, more than three dozen cities with affiliated minor league teams will lose those teams a year from now and thousands of minor league players will be out of work as well.  Read more here, here and here.

Statement From the T-Bones About Sale of Franchise

PRESS RELEASE – The Kansas City T-Bones are progressing toward a sale and are scheduled to complete the sale this week.  The incoming owner has been in close negotiations and planning with the Unified Government, all for the sake of setting the table for continued American Association professional baseball in Wyandotte County. END_OF_DOCUMENT_TOKEN_TO_BE_REPLACED

Two former Mobile BayBears (Double-A, Southern League) assistant general managers are now part of a new company working on a plan to manage Hank Aaron Stadium, which is losing it’s team to a new ballpark near Huntsville (AL).  It’s called Mobile Sports and Entertainment Group, or MSEG, and the owners plans go beyond, but include, baseball. Read more here.

After two seasons in Aberdeen (SD), the Hub City Hotshots (Summer Collegiate, Expedition League) have suspended operations for the 2020 season.  As reported, in a letter from Expedition League President Steve Wagner, who took over operation of the Hotshots this summer, he cited neglect by former team owners Chuck and Mayra Heeman.  Read more here.  Read more background here.

Marshall University has completed the purchase of the Flint Group Pigments property in Huntington (WV) from the Huntington Municipal Development Authority.  The land will be used to construct the Thundering Herd’s new baseball stadium, which is set to open in Huntington in March 2021.  Read more here.

The company for which Routine Field is named is suing the developer of that Franklin baseball park, claiming it is using its name and logo without approval.  Franklin-based baseball apparel company Routine Baseball LLC says it approved a nonbinding letter of intent to sign a naming rights contract with Ballpark Commons LLC, which operates the stadium.  Read more here.  View ballpark photos here.

No Kicking Angels Out of Angel Stadium

The one-year ballpark lease extension the council approved with the Los Angeles Angels in January didn’t mean the current lease would expire when the extension does.  As a result, the Angels could choose between a new or renovated stadium in Anaheim, a proposed waterfront ballpark in Long Beach, or simply play out their current lease, which extends through 2029.  Read more here.

Members of the Huntington Municipal Development Authority agreed Monday to sell the future site of the planned Marshall University baseball stadium to the university.  Construction of the the $22-million, 3,500-seat stadium is slated to be placed out for bid by November 2019 with ground breaking by March 2020.  Read more here.