Summer baseball is returning to Spartanburg and South Carolina’s oldest ballpark. The city council Monday gave the Coastal Plain League the OK to use Duncan Park for a team of top collegiate athletes to play a 52-game season, from late May to mid-August.  Read more here.

END_OF_DOCUMENT_TOKEN_TO_BE_REPLACED

PRESS RELEASE – The Coastal Plain League and its 15 franchises released the following official statement on Wednesday, April 29th in regards to their upcoming 2020 season. END_OF_DOCUMENT_TOKEN_TO_BE_REPLACED

END_OF_DOCUMENT_TOKEN_TO_BE_REPLACED

Baseball has always been America’s pastime.  Despite the popularity of other sports, the timeless appeal of baseball still draws millions to ballparks each year.  The question now is how many would come if the coastal town of Brunswick (GA) built a stadium to bring a Coastal Plain League (Summer Collegiate) franchise to town?  Read more here.  Read more details here.

Atlantic League In, Coastal Plain League Out in Gastonia?

Gastonia (NC) leaders are leaning toward a new partnership that would bring a professional baseball franchise to the city, with the team playing in a new stadium just west of downtown and the ownership group also managing the multipurpose facility.  Read more here.

With an estimated 25 million television and livestream viewers tuning in to the 2019 Coastal Plain League All-Star Showdown, Commissioner and Chief Operating Officer Justin Sellers made the exciting announcement that the league plans to expand to Colonial Heights (VA) in 2020.  Shepherd Stadium is being targeted as the home ballpark for the team.  Read more here.  Read about ballpark renovations here. 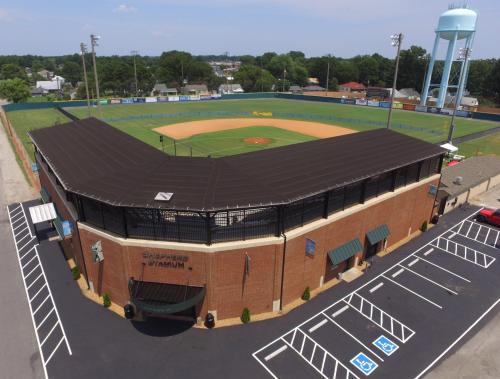 Steamers to be Sold, Moved

Frank Burke, owner of the Edenton Steamers (Summer Collegiate, Coastal Plain League), confirmed last week that he’s in the process of selling the team he bought in 2016.  According to multiple sources, a buyer plans to purchase the franchise and move it from northeastern North Carolina.  Read more here.

The Lexington County Blowfish (Summer Collegiate, Coastal Plain League) will honor the 50th anniversary of the historic moon landing on Saturday, July 20th when they host the Forest City Owls.  The “Concert in the Sky” musical fireworks show will be moon-themed with songs such as “Fly Me to the Moon,” “Bad Moon Rising,” “Moondance,” and “Dancing In The Moonlight.” 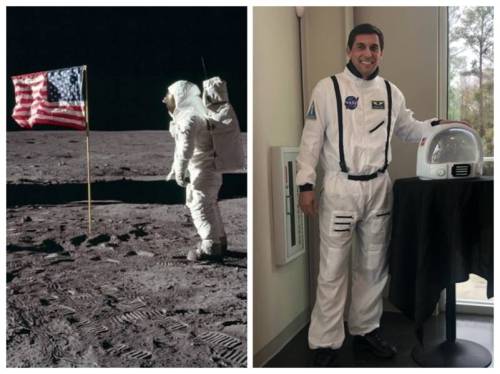 Blowfish to celebrate the 50th Anniversary of Man landing on the Moon-GM Theo Bacot is ready to take off!

The @GoBlowfish to take "1 small step for man, 1 giant leap for man-kind" on July 20. pic.twitter.com/gRQRAKZhbL

The Gastonia Grizzlies (Summer Collegiate, Coastal Plain League) have announced the promotion of long-time employee, Jake Brewer, to Assistant General Manager.  Brewer, also known as the Ticket Leprechaun, is going into his 6th season with the organization.  Read more here. 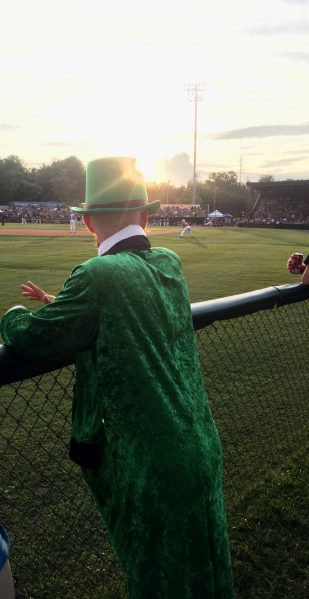 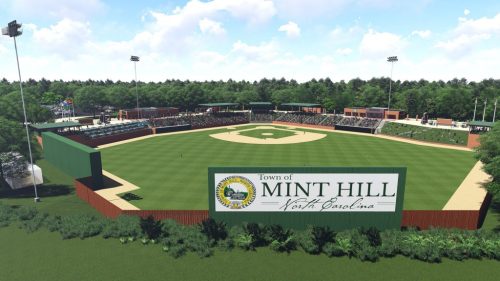 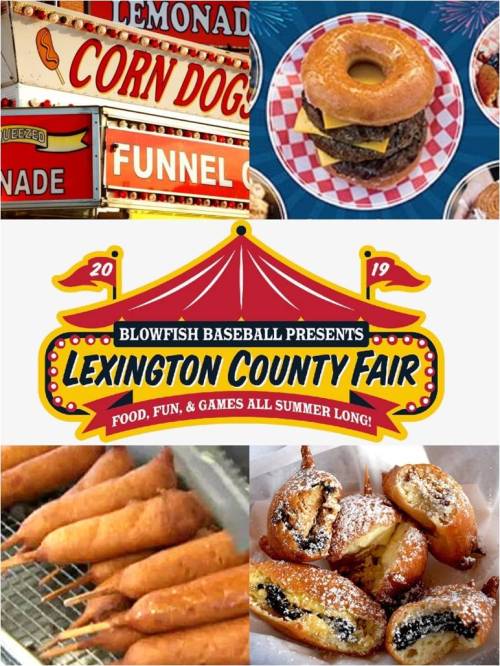 Martinsville to Address Future of Mustangs

As costs continue to rise, while revenues remain flat, the city of Martinsville (VA) has tough budget decisions to make, including evaluating the future of the Martinsville Mustangs (Summer Collegiate, Coastal Plain League).  First, over the last four years, the league has managed the team, as part of a five-year contract with the city that expires after the 2019 season.  Second, Hooker Field needs an estimated $1.5 million in repairs and renovations.  Read more here.

A bond referendum will be on the ballot for Mint Hill (NC) residents on Nov. 6 for the public to vote on two bonds, including one that would fund a 2,500-seat ballpark would be the home of local youth baseball and a Coastal Plain League (Summer Collegiate) franchise.  If approved, construction would last approximately 13 to 15 months with a targeted opening date of May 2020.  Read more here.

Gastonia Officials Get a VR Look at Proposed New Ballpark

Gastonia (NC) Mayor Walker Reid donned a virtual reality headset this week to take a stroll through the proposed multi-use stadium that will anchor the FUSE District on the city’s western side.  Read more and view photos here.

Hot off the Griddle — It’s the Lexington County Pancakes!

END_OF_DOCUMENT_TOKEN_TO_BE_REPLACED

Stars, Stripes and a Dog

PRESS RELEASE – 2018 will be a very colorful, star-studded and patriotic theme that will dominate the summer at Lexington County Baseball Stadium. END_OF_DOCUMENT_TOKEN_TO_BE_REPLACED

PRESS RELEASE – The Blowfish announced today that Brian Larkin has been promoted to Vice-President of Shanahan & Company Sports Management/Blowfish Baseball and Theo Bacot has been named the new General Manager of the Lexington County Blowfish Baseball Club. END_OF_DOCUMENT_TOKEN_TO_BE_REPLACED

More than 100 community members and officials attended the groundbreaking ceremony at Luther Williams Field on Monday, signaling the start of renovations of the historic venue in Central City Park.  When the new Macon Bacon (Summer Collegiate, Coastal Plain League) take the field next summer, fans will be able to enjoy a ballpark with old charm and updated features.  Read more here. 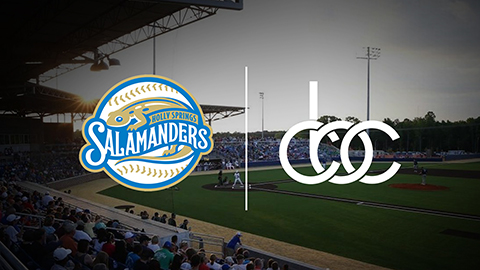 Bibb County (GA) leaders took a tour of historic Luther Williams Field Thursday to see the new plans for their $2.5 million renovations.  The project will update 10 areas in the stadium, starting at the entrance. There will be more than 30 places to buy food, souvenirs, and more, and a 2,000-square-foot beer garden will offer local brews.  Read more and watch news report here.  View renderings here. 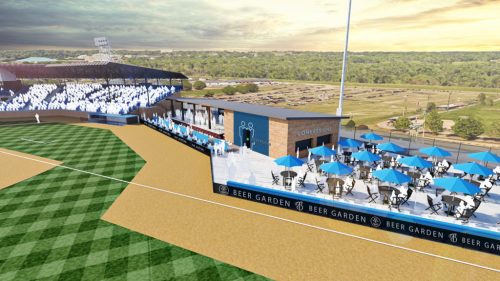 As expected, the Gastonia (NC) City Council has voted to hire Pendulum Studio of Kansas City (MO) to the design the multi-purpose baseball stadium and events complex to be built just west of downtown.  Read more here.

Officials representing the new Coastal Plain (Summer Collegiate) franchise setting up shop at Luther Williams Field in Macon (GA) have announced details about season ticket packages, which include all-you-can-eat food and drinks and in-your-seat wait service.  Luther Williams stadium is slated to receive as much as $2.5 million in upgrades in preparation for the new team.  Read more here.  As we previously posted, the possible nicknames for the team are Soul, Bacon, Hits, Heat, and Noise.

The contest to choose a name for Macon’s new baseball team is going into extra innings.  A deadline of Monday, July 31, was set, but the team has given fans an extra 48 hours to chime in.  The five finalists include: Macon Soul, Macon Bacon, Macon Hits, Macon Heat, and Macon Noise.  Read more here.  View contest here.

Jesse Cole likes to do things his way, but a trio of legendary promoters overlooking his desk inside Grayson Stadium might have had issue with the perceived originality.  His vision has been extracted from Walt Disney, Bill Veeck and P.T. Barnum, whose posters line his office wall.  Read more here.

PRESS RELEASE – The High Point-Thomasville HiToms have agreed in principle with the city of Thomasville to remain at Historic Finch Field. END_OF_DOCUMENT_TOKEN_TO_BE_REPLACED

Creating a ‘Ballpark of the Future’ in Gastonia

The first actual pitch may still be up to three years away, but Gastonia (NC) city leaders tossed out their plan to create a spark in the center city to business leaders Tuesday morning by building a sports stadium without mentioning the word baseball.  Read more here.

Blowfish Announce 2017 as the Season of the Total Eclipse, Unveil Special Jerseys

PRESS RELEASE – The Lexington County Blowfish announced today their 2017 season-long campaign to promote the first transcontinental Total Eclipse in 99 years and the once of a lifetime view from Lexington County, S.C. for the August event. END_OF_DOCUMENT_TOKEN_TO_BE_REPLACED

The possibility of a summer collegiate baseball team in Greenville (NC) will be one of the topics discussed during the City Council’s annual planning retreat on Jan. 27.  Justin Sellers with the Coastal Plain League recently discussed the possibility of adding a Greenville team to the circuit.  According to Sellers:

Gastonia (NC) leaders have spent more than two years crafting a plan for a new entertainment and sports district just west of downtown, which could be anchored by a multi-purpose baseball stadium.  Now they are finally on the mound and firing their first formal pitch to residents.  Read more here.