PRESS RELEASE – After weeks of speculation, the Martinsville Mustangs officially unveiled their new mascot at the 2013 Fast Track Trade Show.

Mo made his much anticipated appearance in front of hundreds of spectators and members of the media. He made his presence known throughout the trade show, flexing his muscles, giving high fives and busting out some dance moves. He also posed for pictures with Miss Virginia and many of the local businesses throughout the show. 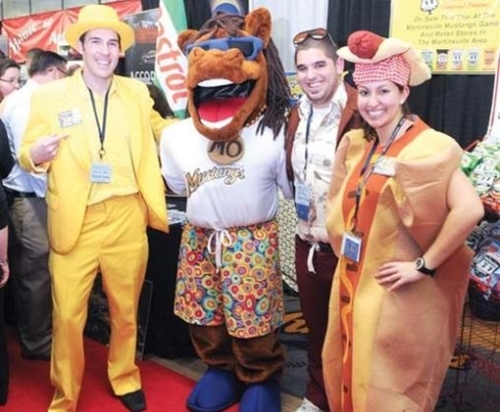 “We were very excited to introduce Mo tonight,” added General Manager Tyler Parsons. “We feel as though he is going to be the perfect representative of fun and excitement for the Mustangs, and I think he is a terrific fit for what we are looking to accomplish in Martinsville.”

The story of how Mo came to Martinsville is an interesting tale. A native of California, Mo grew up along the sandy beaches and was an avid surfer. In his free time, he could often be found working out on the famous Venice Beach, and many believe he is the world’s most athletic horse. Urban legend has it that Mo broke all of Secretariat’s race times, but because he refused to let a jockey ride him, he was disqualified.

But the very definition of “Mustang” is a “free roaming horse”, and that is what ultimately led Mo to his new home in Martinsville. After years of thrashing the waves on the west coast, he embarked on a journey to reach the east coast and fresher pastures. He ran from California, and remarkably reached Martinsville in only four hours, setting a personal speed record along the way. While he was in the city grabbing some food, he heard the news that the Mustangs were looking for a new mascot. Curious, he ventured over to Hooker Field where he met with Parsons, and quickly fell in love with the city and the team’s vast potential. He knew he had found his new home, and when Parsons offered him the position, it was a quick decision.

With the official introduction held yesterday, Mo want to let Mustangs fans know he is here for the long haul, and he can’t wait to see everyone at the ballpark this summer!

The Mustangs Home Opener is set for May 29th against the Florence Redwolves. Limited Reserved Season Tickets are available, and for more information you can visit the http://www.martinsvillemustangs.com or call the front office at 276-403-5250.