PRESS RELEASE – The Buffalo Bisons, Triple-A affiliate of the Toronto Blue Jays, today announced their 2013 television schedule that will include the live broadcast of 48 games to be shown on Time Warner Cable SportsChannel 713 in Buffalo. The schedule begins with on Opening Day, Thursday April 4, as the Bisons host the Rochester Red Wings (2:05 p.m.). 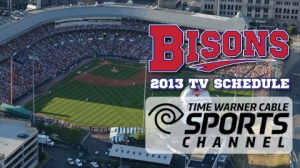 Highlights of the schedule include at least one game every opponent in the International League, giving fans a chance to see all the great players in the league. There will be 37 games shown live from Coca-Cola Field, including a July 7 doubleheader against Thruway Rival, the Syracuse Chiefs, and the club’s July 3 Independence Eve Celebration against the Red Wings.

A slate of 11 road games will include contests from Frontier Field in Rochester, Alliance Bank Stadium in Syracuse and McCoy Stadium in Pawtucket, RI.

All games played at Coca-Cola Field will feature the play-by-play of “The Voice of the Bisons,” Ben Wagner, and the color commentary of Buffalo Baseball Hall of Famer, Duke McGuire. Road games will be commentated on by the respecting home team’s announcers.