Just under one thousand entries were submitted for the Name The Team contest at KokomoBaseball.com. Of those entries, 15 people chose the Jackrabbits name and Fred Barber was randomly drawn for the $2,500 grand prize which includes tickets, merchandise and more!

“The Kokomo Jackrabbits playing Prospect League baseball enhances Kokomo’s identity throughout the state and Midwest,” said Kokomo Mayor Greg Goodnight. “The name Jackrabbits is a tribute to our automotive heritage, and the team and stadium are part of Kokomo’s aim to attract people to fuel the future of our city.”

Other fans who submitted the winning entry at KokomoBaseball.com will receive a Kokomo Jackrabbits prize package, which includes tickets to the home opener and closer at Kokomo Municipal Stadium, an exclusive stadium tour and merchandise. 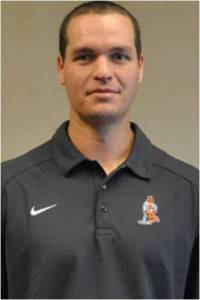 Van Horn is currently Assistant Baseball Coach at Princeton University. Last summer, he served as Assistant Coach of the Prospect League’s Chillicothe Paints and was the shortstop on the Paints 2010 squad that won the Prospect League Championship for the first time and was ranked second in the nation among college summer league teams.

“I am incredibly grateful for this opportunity and am excited to be a part of bringing high level baseball back to the Kokomo community,” said Van Horn. “We are committed to putting the best possible product on the field so that our fans can enjoy a winning experience from the very beginning. I can’t wait to get going.”

“This is another big day for the City of Kokomo and its new baseball club – the Kokomo Jackrabbits,” said Zimmerman. “The new brand is strong and will certainly be a big success for merchandise sales. Our new field manager, Greg Van Horn is an up and comer and we are excited to have him lead our team and its an honor and special treat that Rob Deer has agreed to help Greg as our hitting advisor this summer.”

Prospect League:
The Prospect League was founded in 1963 – known as The Central Illinois Collegiate League until merging in 2009 – and is one of the longest continuously operating, independent, summer collegiate baseball leagues in the country. With the addition of Kokomo, IN the Prospect League will have 12 teams competing in a six state region: Indiana, Illinois, Missouri, Ohio, Pennsylvania, and West Virginia. Visit ProspectLeague.com for more information

Apperson Jackrabbit:
Judges chose the Jackrabbits name because of its historical importance to the city. The Apperson was a brand of automobile manufactured from 1901 to 1926 in Kokomo, Indiana. The Apperson Jack Rabbit was introduced in 1907. It was a 2-passenger roadster, equipped with a four cylinder 60 or 96 horsepower engine. Features included a four-speed transmission, 34-inch wheels and tires, Hess-Bright ignition systems and a 20-gallon round gas tank. It had a guaranteed top speed of 75 miles per hour.