PRESS RELEASE – Long Island Ducks team officials today announced the club’s promotional schedule for the 2011 season. The excitement kicks off on Opening Night, Friday, May 6, when Long Island (and America’s) #1 family-owned and operated appliance and electronics company, P.C. Richard & Son will present “Kevin Baez Bobblehead Night.” Bobbles of the Ducks’ manager will be handed out to the first 2,000 fans, courtesy of the electronics & appliance giant and long-time Ducks sponsor.

“We have an excellent lineup of promotions on tap for the 2011 season,” says Ducks president/general manager Michael Pfaff. “As we enter our 12th season, Ducks baseball continues to be the best entertainment value on Long Island.” 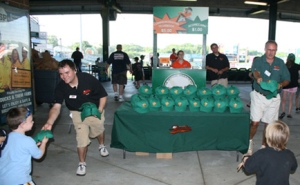 The promotional schedule is highlighted by 10 Grucci Fireworks Extravaganzas sprinkled throughout the year. In addition to ever-popular giveaways like t-shirts and hats, fans will also be treated over the course of the season to items such as cow bells, replica ballparks, inflatable bats, posters, baseball cards, lunch boxes, and baseballs, as well as several other giveaways for fans of all ages. The Ducks will also host an array of theme nights, including Irish Heritage Night, Tribute to America Night, Health Night, Autism Awareness Night, and Breast Cancer Awareness Night. The complete 2011 promotional schedule can be viewed below.

Tickets for all of these dates will go on sale beginning 10:00 a.m. on Saturday, March 19, at the Long Island Ducks box office. The ballpark will be the one and only place to get Ducks game tickets until 2:00 p.m. that afternoon, so fans are encouraged to arrive early to ensure the best availability for all of this year’s great promotional dates. A Carnival-like atmosphere will descend upon Bethpage Ballpark as the Ducks usher in a new season of fun and affordable family entertainment. At 9:00 a.m. Bethpage Federal Credit Union will be on hand to unveil the new naming rights signage atop the ballpark. Coach Bud Harrelson, new manager Kevin Baez, Ducks players and mascot QuackerJack will be on hand to take part in all the morning fun from the ballpark, meeting fans and signing autographs. Fans will be treated to complimentary food and beverage, courtesy of Bethpage, Entenmann’s, Pepsi, Centerplate, Herr’s and other Ducks partners. An excess of games, contests and activities will keep the fans entertained as they wait in line to purchase the hottest baseball tickets on Long Island.

Beginning at 2:00 p.m. Saturday, fans can also purchase tickets by going to www.liducks.com and clicking on the tickets icon or by calling 631-940-TIXX.

The Long Island Ducks are entering their 12th season of play in the Atlantic League of Professional Baseball. Opening Day is May 6. For season ticket or advertising information, visit www.liducks.com or call 631-940-DUCK.