PRESS RELEASE – The Five-Time Atlantic League Champion Somerset Patriots will host open contestant auditions for “Who Wants To Be A Millionaire” at TD Bank Ballpark before their game on Wednesday, August 15th.

Locally, “Who Wants To Be A Millionaire” with Emmy Award-Winning host Meredith Vieira can be seen on WABC (ABC, Ch.7) weekdays at 12:30 pm. 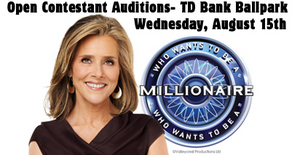 The first 2,500 people in attendance (18 years of age or older) will be able to take an audition test beginning at 6:40 pm to see if they have what it takes to qualify to be a contestant on the show. If they score high enough on the audition test, participants will be able to interview with producers of the show at the ballpark to advance to the next stage to become possible contestants.

Contestant auditions will consist of a timed multiple-choice test and for those people who pass, a short one-on-one interview with a “Millionaire” producer.

All participants must have a ticket to that evening’s game. The event includes a Fireworks show immediately following the Patriots 7:05 pm game against the York Revolution.

Interested individuals are asked to arrive early, with gates opening at 6:00 pm, to be able to get set up to participate in the audition test.

“We are excited to host open auditions for Who Wants To Be A Millionaire at our ballpark. This is a unique event that will allow our fans and fans of the game show to show their trivia skills in an effort to become contestants on the show,” said Patrick McVerry, President/General Manager of the Somerset Patriots.

“Who Wants To Be A Millionaire” showcases ordinary people who are given an extraordinary chance to change their loves and win $1,000,0000 by answering 14 general knowledge trivia questions. “Millionaire” will premiere an all-new season on Monday, September 3, 2012.

The 2012 Somerset Patriots Season presented by Ford is underway. For tickets, stop by the ticket office, call (908) 252-0700, or visit www.somersetpatriots.com.