PRESS RELEASE – The Hagerstown Suns, Class-A affiliate of the Washington Nationals, are pleased to welcome Kevin Gehl as their new Director of Broadcasting and Media Relations for the 2017 season. He will serve as lead radio play-by-play announcer for the Suns in addition to his front office role as manager of media relations and multimedia outreach.

Since 2015, Gehl has worked as a reporter and announcer for the Big Ten Network, providing live interviews and updates from ice level on BTN hockey coverage and play-by-play calls for baseball, basketball, hockey, soccer, and volleyball on BTN Plus. He joins the Suns after spending 2016 as a radio broadcaster for the Lansing Lugnuts, Class-A affiliate of the Toronto Blue Jays, in the Midwest League. To sample Gehl’s on-air work, click here. 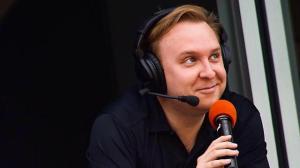 “We are very excited to add a broadcaster with the experience that Kevin brings to Hagerstown and the South Atlantic League,” Suns general manager Travis Painter explained. “His knowledge and experience will be a great asset to our team.”

“Hagerstown has such a rich baseball history but there’s also a new energy around this Suns organization,” Gehl added. “I’m eager to take Suns radio broadcasts and media relations to the highest level as we enjoy one of the best views from a broadcast booth in all of baseball here at Municipal Stadium.”

Gehl brings a well-rounded set of broadcast skills to Hagerstown. From 2011 to 2015, he worked as a sports anchor and reporter for WLNS-TV (CBS) in Lansing, Michigan. Gehl co-hosted the award-winning Friday 5th Quarter and reported live from marquee events like the Final Four, Rose Bowl, and Carrier Classic basketball game aboard the U.S.S. Carl Vinson.

A native of the San Francisco Bay Area, Gehl graduated from the University of Missouri with a bachelor’s degree in broadcast journalism. His additional television credits include sports reporting for KOMU-TV (NBC) in central Missouri and Cal-Hi Sports Bay Area on Comcast SportsNet California. He also worked as a radio play-by-announcer for WZOQ-FM in northern Ohio and the Michigan State Spartans Radio Network.

Gehl will broadcast all Suns home games from historic Municipal Stadium on http://www.hagerstownsuns.com via TuneIn Radio. Opening Night is set for Thursday, April 6 with first pitch against the Asheville Tourists at 6:05 p.m.

For Suns media inquiries and requests during the 2017 season, please contact Gehl by e-mail at kevin.gehl@hagerstownsuns.com or by calling (301) 791-6266.