It’s reportedly the final year of baseball at Lawrence-Dumont Stadium, as officials have said it may be demolished to make way for a new, modern ballpark.  Details about the future of the Wichita Wingnuts (Independent Professional, American Association) are unclear, but the team is honoring the ballpark with a replica stadium giveaway on Aug. 28.  Read more here. 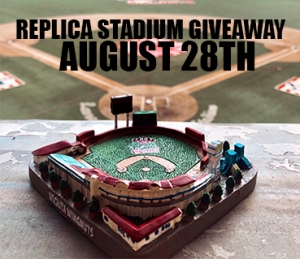