For a decade, the Atlantic City Surf (Independent Professional, Atlantic League/Can-Am League) called Sandcastle Stadium home.  Since the team folded after the 2008 season, the site has sat vacant except for the occasional college or Babe Ruth league game.  This could soon change, as former Surf owner Frank Boulton wants to bring baseball back to the ballpark.  Read more here.  Thanks to John Cerone for the link.

Plans are moving forward to bring a baseball team and a multi-use stadium to downtown High Point (NC), and it appears the Bridgeport Bluefish (Independent Professional, Atlantic League) will be heading south to open a new chapter for the franchise.  Read more and watch video here.  Read about hotel project here. 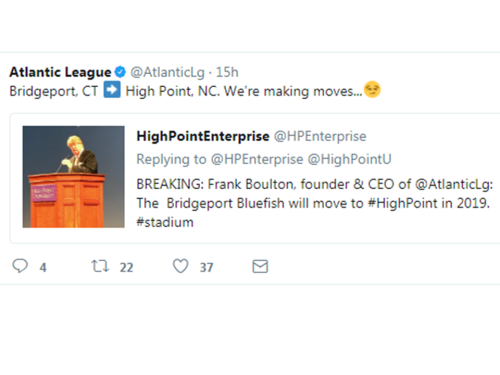 Atlantic City (NJ) received four proposals for the redevelopment of Bader Field this month, including one from the original owner of the Atlantic City Surf baseball team and another from the owner of the former Revel casino.  Read more here.  Thanks to John Cerone for the link.

Mayor Joe Ganim‘s economic development department is reviewing three competing contenders — Frank Boulton, Howard Saffan/Live Nation and an unnamed soccer organization — to use the Harbor Yard ballpark in Bridgeport after a proposed $185 million renovation.  Some have raised concerns that the decision has already been made.  Read more here.

In a lengthy phone conversation with Atlantic League CEO and founder Frank Boulton, he confirmed that that the league has had conversations about a return to “one or both” of the Atlantic City and Camden markets, but not for the 2017 season.  Read more here.  Thanks to John Cerone for the heads up.

A Look at the Business of Independent Professional Baseball

There is not much new here for those who follow the baseball industry closely, but writer Andrew Beaton via The Wall Street Journal takes a look at the business of independent professional baseball.  Read more here.

PRESS RELEASE – The Diamond League of Professional Baseball will not start in 2014 with the contemplated 60-game schedule. Although I am disappointed that we will not start Diamond League play in 2014, I feel it is more important to start a new project based on a solid foundation. I was unable to be completely satisfied that there were six available facilities that measured up to our END_OF_DOCUMENT_TOKEN_TO_BE_REPLACED

PRESS RELEASE – The Atlantic League of Professional Baseball Clubs, Inc. (ALPB) today announced following its annual All-Star Game Board of Directors meeting that a search committee consisting of members of the Board of Directors has been formed to seek a new League President. END_OF_DOCUMENT_TOKEN_TO_BE_REPLACED

In not-so-surprising news, Atlantic League CEO Frank Boulton said Thursday that his developing new short-season circuit — the indy pro Diamond League — has an interest in putting a team in Atlantic City (NJ).  That said, the city doesn’t appear to be rushing to the table, and 16-year-old Surf Stadium (akaThe Sandcastle) would need a few more fixes.  Read more here.  Thanks to John Cerone for the link.

Not surprisingly, Worcester (MA) is a primary target for the new indy pro Diamond League announced this past week.  As quoted in the Worcester Telegram, league founder Frank Boulton had this to say:

“Worcester’s chances of being part of the six teams that we announce in August are very good.”

Read more here.  Thanks to John Cerone for the link.

PRESS RELEASE – The formation of a new professional baseball league to be known as “The Diamond League of Professional Baseball,” was announced today following a league meeting held this morning. END_OF_DOCUMENT_TOKEN_TO_BE_REPLACED

Founder and CEO of the indy pro Atlantic League Frank Boulton said he is interested in bringing professional baseball back to Worcester (MA) as part of a new developmental league he plans to announce in mid-June.  He emphasized that the new league will not be associated with the Atlantic League.  Read more here.  Thanks to John Cerone for the link.

Creation of New League Could Bring Baseball Back to Atlantic City

Despite a rejection of a the $400 million referendum vote in Nassau County (NY) this week that would have funded a new arena for the NHL’s New York Islanders and a new stadium for an iny pro Atlantic League expansion franchise, Long Island Ducks (Atlantic League) owner Frank Boulton has not thrown in the towel.  Read more here.

PRESS RELEASE – Nassau County officials today announced that the rights to operate a minor league baseball team as part of the new Coliseum development has been awarded to the Atlantic League and Frank Boulton, founder and CEO of the Atlantic League of Professional Baseball. Boulton’s group was one of two groups to answer the County’s request for proposals, along with END_OF_DOCUMENT_TOKEN_TO_BE_REPLACED

The Stamford Advocate’s Chris Elsberry had the opportunity for a brief Q&A with Atlantic League President and CEO Frank Boulton.  The questions revolved around the Bridgeport Bluefish, which Boulton took over last year, and his Long Island Ducks.  Interestingly, Boulton sold half of the Ducks this year to Deutsche Bank Americas CEO Seth Waugh, who has an option to buy an even END_OF_DOCUMENT_TOKEN_TO_BE_REPLACED