Curve to Become ‘Allegheny Yinzers’ for Select Dates in 2019

PRESS RELEASE – The Altoona Curve announced another addition to the 2019 promotional calendar on Tuesday with a seven-game team rebrand series, complete with a new team name and uniforms. On select weekend home games at Peoples Natural Gas Field, the Curve will take the field as the Allegheny Yinzers. The new identity is a tribute to the familiar second-person plural pronoun “yinz” that is commonly used by people of Western and Central Pennsylvania. 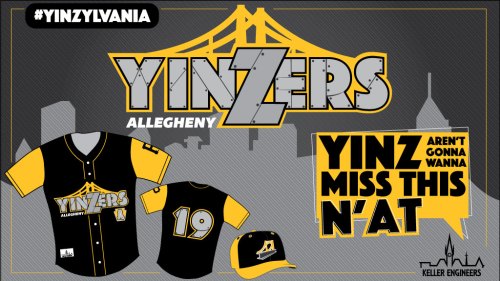 END_OF_DOCUMENT_TOKEN_TO_BE_REPLACED

PRESS RELEASE – The Altoona Curve announced on Wednesday the first highlight to the 2019 promotional schedule with a unique bobblehead featuring Kevin Newman and Kevin Kramer. The Newman and Kramer bobblehead giveaway is scheduled for Saturday, July 27 when the Curve host the Richmond Flying Squirrels and will be handed out to the first 1,000 fans at Peoples Natural Gas Field, presented by Nuts For You. 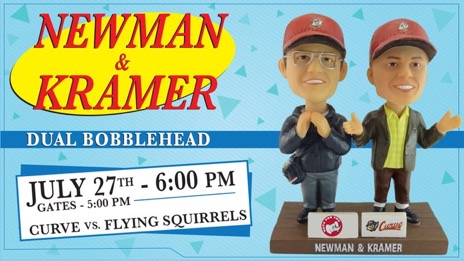 END_OF_DOCUMENT_TOKEN_TO_BE_REPLACED

Derek Martin took over as general manager of Altoona Curve (Double-A, Eastern League) in October, after being away from professional baseball for nearly a decade.  He  has spent the past few months acclimating to the new job, personally and professionally, and is getting ready for the Curve’s season beginning in three weeks.  Read more here.

The Altoona Blair County Development Corporation announced Tuesday that PNG Field, home of the Altoona Curve (Double-A, Eastern League), needs $2.2 million in maintenance that must be taken care of within the next two to four years.  Read more and watch news report here.

PRESS RELEASE – Ask almost anyone from any generation about a “ghost man” and it will conjure up childhood memories of playing baseball with imaginary base runners. The Altoona Curve (AA, Pirates) plan on bringing those ghost men to life as part of the 2014 Eastern League All-Star Stop in Curve, Pa. on Tuesday, July 15. “The Curve, Pa. Ghost Man Games and Hitting Challenge” will cap an END_OF_DOCUMENT_TOKEN_TO_BE_REPLACED