David P. Kronheim from NumberTamer.com has as released his 211-page minor league baseball attendance analysis for the 2019 season.  Mr. Kronheim has been kind enough to share his data with us over the last few years, and this and previous reports can be found under our Attendance Rankings page.  View Kronheim’s 2019 Minor League Baseball Attendance Analysis here. 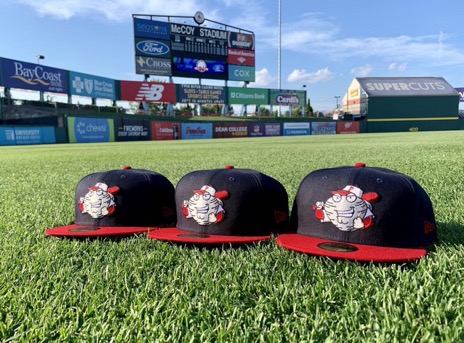 The Best College Baseball Stadiums According to Fans

The Rocky Mountain Vibes (Rookie, Pioneer League) now lead the Pioneer circuit in attendance with an average of 3,959 fans per game after the team’s inaugural three-game homestand this past weekend.    That’s still filling less than half of a 8,500-seat venue that hosted a Triple-A club until the end of last season, but it’s a great start.   As we’ve suggested before, we worry about the impact the lack of intimacy of a half-empty ballpark will have on the fan experience and long-term attendance.  We’ll see.  Read more here.  Watch video here.

WOW! Thank you, Southwest Washington! We had an amazing time last night at opening night of our inaugural season with a few thousand of our closest friends.

With the start of the 2019 professional baseball season right around the corner, the folks at For the Win have ranked the 10 most-outrageous (and delicious) ballpark foods in Major League Baseball.  Read more and view food photos here. 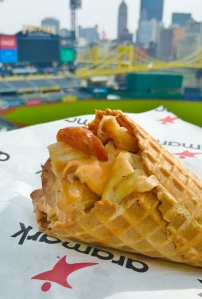 David P. Kronheim from NumberTamer.com has provided us with his 100-plus-page annual analysis of minor league baseball attendance for 2018.  This and previous reports can be found under our “Attendance Rankings” tab.  View Kronheim’s 2018 Minor League Baseball Attendance Analysis here.

The Tampa Bay Rays, who ranked next to last in the majors in attendance last season, are eliminating more than 10,000 seats in the upper deck in an effort to create a more “intimate” experience for fans at Tropicana Field.  The Rays also indicated that will would add a premium seating section in the lower level.  Read more here.

It wasn’t easy, but Joe Mock of BaseballParks.com has dug deep into his personal memory database to compile a list of his 100-biggest moments at the ballpark.  Read more here.

Stadium Journey takes a look at the top independent baseball stadiums in North America.  The results were similar to their first rankings two-years-ago, but there have been a few new facilities that made the 2018 list.  Read more here.

As well as the Oakland A’s are playing, one look at their anemic attendance at the Coliseum will tell you why the team is looking to move to Howard Terminal.  Read more here. 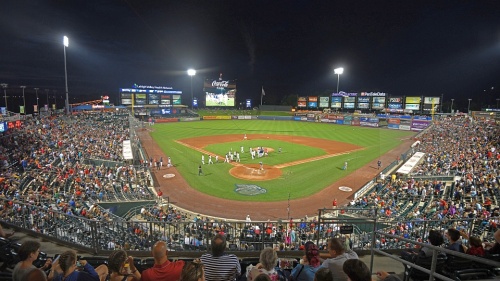 END_OF_DOCUMENT_TOKEN_TO_BE_REPLACED

The Ballpark Business 2018 Per Game Average Attendance Mega-Rankings are here.  The Columbus Clippers (Triple-A, International League) take the crown at #1.  The St. Paul Saints (American Association) are the top independent club flexing their muscles in the #8 spot.  The Madison Mallards (Northwoods League) are once again the top summer collegiate performer moving up from #23 to #22. 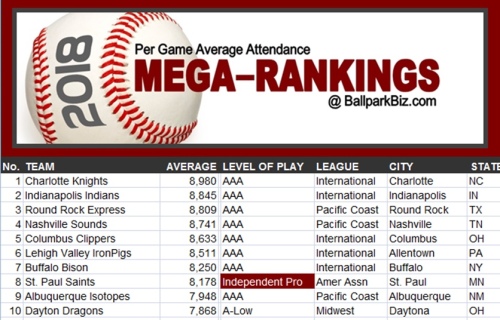 The annual list combines and ranks the per game average attendance of all affiliated minor league, independent professional, and Top-100 summer collegiate franchises in the U.S. and Canada.  View rankings here.

Ranking All 30 MLB Ballparks by Building Only

Tim Newcomb of Popular Mechanics has ranked all 30 Major League Baseball Parks in a recent post, “based solely on the buildings.”  We don’t think there will be much for big surprises here, at least at the top, for most ballpark tourists, but it’s worth a quick read.  Read more here. 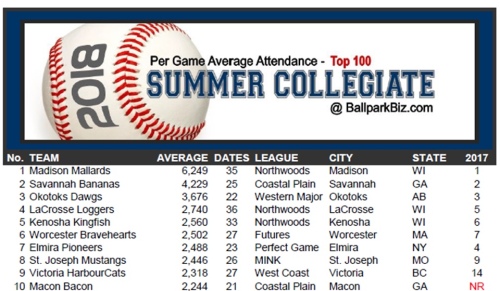 END_OF_DOCUMENT_TOKEN_TO_BE_REPLACED

The start-up Expedition League (Summer Collegiate) wrapped up its first regular season this past weekend with all eight teams still in operation.  If you have experienced this new league and attended any games, feel free to share your feedback here in comments or via e-mail at contact@ballparkbiz.com.  In the meantime, view attendance numbers here.  Read more here. 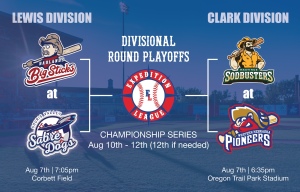 The Somerset Patriots welcomed their 7,000,000th Fan to TD Bank Ballpark on Thursday, July 26th. At 6:34 pm, Dan Heitkamp of Washington Township purchased the ticket to the game and entered the main gate with his 4-year old godson Logan where he was greeted by Somerset Patriots President/General Manager Patrick McVerry and Manager Emeritus Sparky Lyle among the fanfare. 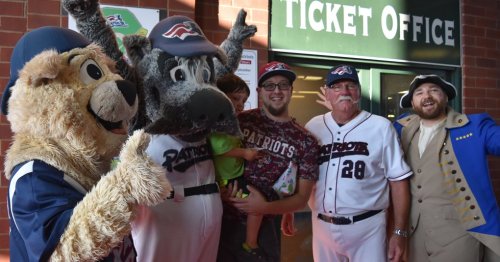 END_OF_DOCUMENT_TOKEN_TO_BE_REPLACED

Ranking the 30 MLB Parks by Neighborhoods

The Chicago Tribune’s Colleen Kane, Mark Gonzales and Paul Sullivan have ranked all 30 MLB ballparks based on their neighborhood surroundings.  Read more here.

The college baseball fan’s attention largely focused on the game on the field, which is almost completely unlike the family-friendly atmosphere of the minor leagues, where on-field action is almost secondary to promotions, mascots and concessions.  Read more here.

Three years ago, Baseball America took a crack at ranking the best ballparks in the minor leagues.  Now, they’ve given it another go.  They sent surveys to broadcasters and scouts across the country and asked them for their take on the subject.  Read more here.

While the last game of the Augusta GreenJackets’ (Single-A, South Atlantic League) inaugural four-game home stand at the new SRP Park was postponed because of weather, attendance for the first three games was enough to put the team in fourth place out of 14 teams in the South Atlantic with 5,102 fans per game.  The team averaged 2,743 fans per game in 2017.  Watch a clip of home opener below:

Parkview Field, home of the Fort Wayne TinCaps (Single-A, Midwest League), is featured on the cover of the January issue of Stadium Journey for being ranked the number one ballpark experience in minor league baseball for the fourth consecutive year.  Read more here and here.

There’s nothing better than a beer and bratwurst while watching baseball — America’s great pastime.  And while the major macro brewers out there tout being “America’s beer,” some stadiums are also great locations to enjoy America’s craft beer.  Read more here.  See ReviewTrackers study here.

PRESS RELEASE – A total of 41,832,364 fans passed through the gates at Minor League Baseball games in 2017, the fifth-highest attendance total in the history of the organization, which was established in 1901. END_OF_DOCUMENT_TOKEN_TO_BE_REPLACED

The Ballpark Business 2017 Per Game Average Attendance Mega-Rankings are here.  The Indianapolis Indians (Triple-A, International League) take the crown at #1.  The St. Paul Saints (American Association) are the top independent club maintaining last year’s #7 spot.  The Madison Mallards (Northwoods League) are once again the top summer collegiate performer moving up from #28 to #23. 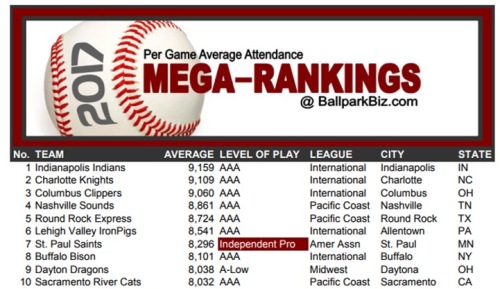 The annual list combines and ranks the per game average attendance of all affiliated minor league, independent professional, and Top-100 summer collegiate franchises in the U.S. and Canada.  View rankings here.

The United Shore Professional Baseball League wrapped up its sophomore season Sunday with a 4,050 fans gathered at Jimmy John’s Field in Utica (MI) for the developmental league’s title game.  On the season, the USPBL averaged 3,350 fans per game and sold out 60 of its 75 games — up from 42 last season.  Read more here.

With the announced crowd of 4,762, the Charleston RiverDogs (Single-A, South Atlantic League) set the franchise’s new attendance record with 296,647 fans having now passed through the turnstiles at Riley Park this year.  Read more here.  Actor/Director Fun Bill Murray provided fans with a personal thank you below: 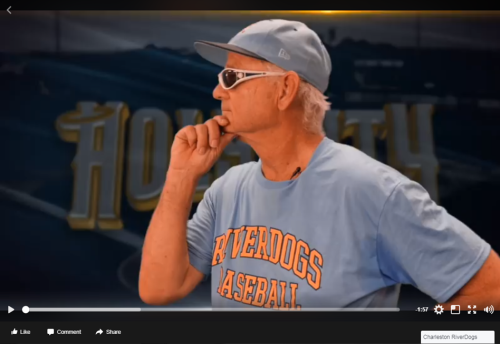 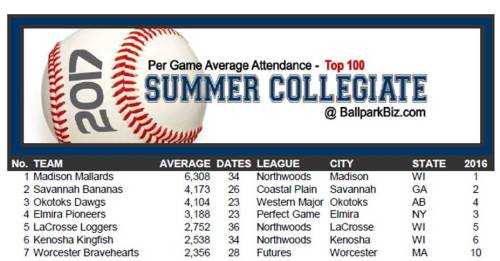 Sports Illustrated has posted its ranking of Major League Baseball ballparks based on food safety records from public inspection records gathered from local health departments in the United States and Canada.  Tropicana Field, home of the Tampa Bay Rays, comes in at the bottom.  Read more and view list here.

A Miami Marlins fan walks into a bar, and this is no joke:  He wants to watch his team play, but all 10 televisions are tuned to other games in other time zones.  The bar, located near Marlins Park, broadcasts the lack of allegiance for the home team loud and clear.  Read more here.

When Seattle Seahawks punter Jon Ryan purchased a minority stake in the Portland Pickles baseball club back in April, he stated his intention to be involved in the operations of the team, while helping to craft an eccentric atmosphere at the ballpark.  As of July 3, the team is averaging 1,642 fans per game.  Read more here.  Read about the Pickles’ 2017 home opener here.  View home opener photos here.