END_OF_DOCUMENT_TOKEN_TO_BE_REPLACED

The Legacy of the Late President of the Colorado Rockies

Joe Mock of BaseballParks.com has penned a wonderful profile about the late President of the Colorado Rockies, Keli McGregor.  Mock became fascinated by McGregor because of what he meant to development to Coors Field and Salt River Fields.  The timing of the article was to coincide with the 10th anniversary of his untimely passing on April 20, 2010.  Read more and view photos here.

MiLB Statement Regarding Delay of 2020 Season

“In light of the current coronavirus outbreak, and after consultation with medical professionals and our partners at Major League Baseball, Minor League Baseball will delay the start of the 2020 Championship Season. We will continue to monitor the developments and will announce additional information about the 2020 season at a later date. We will work with Major League Baseball and our community partners to resume play as soon as it is safe to do so. The health and safety of Minor League Baseball fans, players and executives is our top priority, and our thoughts are with those around the world who have been affected by this outbreak.”

New York Yankees fans may soon be able to meet outside the Bronx stadium at the corner of Jeter Street and Rivera Avenue.  Cary Goodman, who runs the area’s business improvement district, is petitioning City Council to rename East 161st Street between Gerard and River avenues after Derek Jeter, the Yankees retired shortstop.  Read more here.

A 200 lb sow black bear made its way through the University of Tennessee campus before getting stuck inside the Vols’ baseball stadium early Sunday morning.  Read more and watch video here.  View TWRA Facebook page here.

Destination Winter Saint Paul is open at CHS Field, home of the St. Paul Saints (Independent Professional, American Association) through Feb. 22.  There’s excitement for all ages in one place with the relocation of Wells Fargo WinterSkate from Landmark Plaza to the playing surface at CHS Field and the return of the Securian Financial SuperSlide for the first time since Super Bowl LII.  Read more and view video clip here.  Learn more details here.

A fire broke out Saturday afternoon inside the new Rangers ballpark sending a pillar of black smoke into the sky above the still under construction stadium, scheduled to open next year.  Read more and view photo here.  Read more and watch video here.

PRESS RELEASE – The North Shore Navigators are devastated to announce the passing of beloved general manager Bill Terlecky after a courageous battle with cancer. END_OF_DOCUMENT_TOKEN_TO_BE_REPLACED

The Texas Rangers are starting their final homestand at Globe Life Park, their home for the past 26 seasons.  Joe Mock of BaseballParks.com interviewed longtime members of the Rangers family to learn their favorite memories of the ballpark.  Their thoughts are in this article, originally penned for USA TODAY Sports Weekly.  Read more here.  He also provided a timeline of the biggest events in the ballpark’s history.  Read more here.

A years-long campaign to bring awareness about historic Hamtramck Stadium has led to a unique fundraising opportunity to restore the park through the Michigan Economic Development Corporation (MEDC).  The former home of the Detroit Stars is one of only five Negro National Leagues ballparks still standing in the United States.  Read more here.

Happy Birthday, America!  We wish you  and your family a safe and pleasant 4th of July holiday.

Tagged as 4th of July

The Washington Nationals this week became the first of 15 Major League Baseball (MLB) clubs to display a Smithsonian-created, interactive statue of astronaut Neil Armstrong’s Apollo 11 spacesuit. The “Apollo at the Park” program is part of the National Air and Space Museum’s celebration of the 50th anniversary of the 1969 mission that made Armstrong the first man on the moon.  Read more here.

Neil Armstrong spacesuit statues are coming soon to a participating ballpark near you: https://t.co/PdRW85UOsX 👨‍🚀⚾️

When you visit the statues, use your phone for a content activation to learn more about #Apollo11, and make sure to share your photos using #SnapTheSuit. #Apollo50 pic.twitter.com/yps3cClTMY

Nearly 44 years ago, Elton John performed two sold-out concerts in Dodger Stadium. It was the first rock show in the stadium since The Beatles nearly a decade before.  More than 100,000 people flooded the stadium on Oct. 25 and 26, 1975.  These concerts are featured prominently in the new biographical film Rocketman.  Read more here.

A Look Back at Raleigh’s Devereaux Meadow Baseball Stadium

Once he became burned out on playing baseball, Chris Garagiola searched for a new passion.  He didn’t grow up dreaming of following his famous grandfather, Joe Garagiola, who went from a major league playing career (1946-54) to becoming an American icon as a baseball broadcaster and television host. And really, who could imagine following that path?  Rather, it was circumstance that led Chris to even try broadcasting.  Read more here.

We are sad to learn that sports logo designer Keith Flynn of Flynnagain Productions died this past Tuesday, October 9th. Chris Creamer of SportsLogos.net remembers Flynn and showcases some of his work in a post today.  Read more here.  Read obituary here.

From 1938 to 1977, Sicks Stadium hosted thousands of baseball games, a couple football games and a number of concerts. It was home to a handful of teams from various leagues and divisions.  It was, during the sport’s much-hailed glory days, where baseball lived in Seattle.  Read more here.  View ballpark photos and specs here.

At the corner of Michigan and Trumbull avenues in Detroit (MI), a ballpark was built there in 1895 and was the site of professional baseball for more than 100 years.  The Detroit Tigers made it their home in 1912, and it stayed that way until Sept. 27, 1999, when the last game was played at Tiger Stadium.  Barely five miles away in the near north suburb of Hamtramck, the former home of the Negro League Detroit Stars has sat neglected and forgotten for at least two decades.  Read more and view photos here.

The body of an employee was found in a freezer at SunTrust Park, the home stadium of the Atlanta Braves, Tuesday afternoon.  Read more and watch news report here.

The Yawkey Foundation issued a statement Wednesday following an announcement from the Boston Red Sox that the club had filed a formal petition to restore Yawkey Way to its original name, Jersey Street.  Read more and view full statement here.

Are you a baseball fan with deep pockets?  If so, you have an opportunity to snatch up the home of Major League Baseball’s all-time record holder for most consecutive games played.  Baltimore Orioles Hall of Fame shortstop Cal Ripken, Jr.’s palatial 24-acre estate in Reisterstown (MD) is going on the auction block on May 12th.  The property, which includes a baseball field, was originally priced at $12.5 million.  View details here. 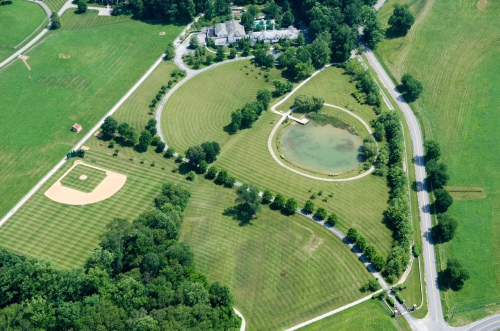 A Look Back at the Triple-A Maine Guides

This small coastal town is a summer vacation destination, known across New England and Quebec for its amusement park, pier and plentiful bars. For most of the year, it’s a quiet place, populated with fewer than 10,000 people living across approximately eight square miles.  Read more and view photos here.  Visit ballpark website here.

Koichi Kaminishi (96), the last living member of the Vancouver Asahi, a storied Japanese-Canadian baseball team active from 1914 until Canada’s mass internment of Japanese during World War II, recently reflected on the team and his wartime experiences.  Read more here.  A movie about the team was released in 2014.  Read more here.

The City of Binghamton (NY) has received a $195,159 donation from the estate of Marion O’Connor for improvements at NYSEG Stadium, home of the Binghamton Rumble Ponies (Double-A, Eastern League).  O’Connor was a longtime fan who regularly attended baseball games at the ballpark with her brother, William O’Connor.  The donation was made in his honor.  Read more here.

Officials are moving toward a plan to renovate Hamtramck’s (MI) historic Negro League ballpark.  The city has hired Smith Group JJR for $76,900-plus to create a pre-development plan as a precursor to any construction.  Read more here.

Father of Ballpark Nachos Passes Away

One of the kings of comedy in the minor leagues is gone.  Myron Noodleman, whose real name is Rick Hader, died on Wednesday after a battle with an aggressive form of cancer.  The disease kept him from performing in ballparks as Noodleman and away from his day job as a high school teacher.  Read more here.

All-Girls School to Take Up Residence at Boulders’ Ballpark?

The New York Yankees said Sunday they’ll install more protective netting in its Bronx ballpark — and the dad of a toddler who was struck by a foul ball two weeks ago said the decision came not a moment too soon.  Read more here.  Father describes ordeal here.

Hurricane Irma, tracking to hit South Florida this weekend, could be the first real test for Marlins Park.  Read more here.  Meanwhile, the Atlanta Braves are apologizing for playing “Rock You Like A Hurricane” by the Scorpions vs. the Miami Marlins after offering free game tickets to hurricane-fleeing Floridians.  Read more and watch video here.

All Rise — Court is in Session at Yankee Stadium

Inspired by rookie power hitter Aaron Judge, some New York Yankees fans have shown up at the ballpark in judges’ robes and white wigs.  Now, the team has made it official — with faux wood paneling to resemble a courtroom’s jury box, the team has officially marked three rows in section 104 as the “Judge’s Chambers.”  Read more and view photos here.

PRESS RELEASE – It is a landmark day for the Victoria HarbourCats, as the West Coast League club is proud to announce the signing of left-handed pitcher Claire Eccles, who is set to become the first female player in WCL history. END_OF_DOCUMENT_TOKEN_TO_BE_REPLACED

The New York Mets were leading the Philadelphia Phillies, 2-1, after two innings when Tom McDonald stood up from his upper-deck seat at Citi Field.  Read more and view photos here.

PRESS RELEASE – Green Bay Bullfrogs founder, Jeff Royle, passed away at the age of 48 Tuesday, January 17th. Royle was responsible for bringing Northwoods League baseball to Green Bay and was majority owner of the Bullfrogs from it’s inception in 2007 through December 2013. Under his leadership the Bullfrogs reached the playoffs in 2007 and 2009. END_OF_DOCUMENT_TOKEN_TO_BE_REPLACED

In the third of a series of articles about Turner Field, Joe Mock from BaseballParks.com has released his interview with former Atlanta Braves star Chipper Jones about his 16 memorable years at the ballpark.  Read more here.