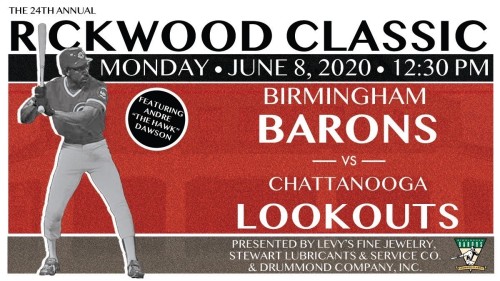 This annual game is set for Monday, June 8th at 12:30pm and will celebrate the legendary Birmingham Black Barons and the 100th Anniversary of the Negro Leagues. The game will feature the Birmingham Barons against the Chattanooga Lookouts, the Double-A Affiliate of the Cincinnati Reds. Baseball Hall of Fame outfielder Andre “The Hawk” Dawson will be this year’s special guest of honor.

“We’re thrilled to turn back the clock and once again host the Rickwood Classic at America’s Oldest Ballpark on June 8th to celebrate the legendary Birmingham Black Barons and the Negro Leagues. Rickwood Field is such an important part of baseball history here in Birmingham and in hosting the classic it connects so many generations of Barons and baseball fans for one special, fun afternoon,” said Barons General Manager Jonathan Nelson. “The Barons and Friends of Rickwood are thrilled to welcome Hall of Famer Andre Dawson and thankful for Levy’s Fine Jewelry, Stewart Lubricants and Service Company, and Drummond Company, Inc. for their support and sponsorship of the Rickwood Classic.”

This year’s Rickwood Classic will celebrate the Birmingham Black Barons and the 100th Anniversary of the Negro Leagues (1920-1963). In 1920, the Birmingham Black Barons became a charter member of the eight-team Negro Southern League. During the 1920’s, Birmingham would see future Hall of Famers Leroy “Satchel” Paige, George “Mule” Suttles, and Bill Foster suit up for the Black Barons. During the 1940’s the Black Barons would win three (1940, 1945, 1948) league pennants and produce more future stars of the game including MLB Hall of Famer Willie Mays and Lorenzo “Piper” Davis.

“When I was growing up, the only place to watch the Barons was at Rickwood Field, so in my mind there is always that association between the team and the field,” said Levy’s Fine Jewelry Manager Todd Denaburg. “As wonderful as the new field is, it’s always so special to me when the Barons play at Rickwood and we are very proud to be able to be a part of that.”

Andre Dawson, a National League MVP (1987) winner and Hall of Famer played 21 seasons with the Montreal Expos, Chicago Cubs, Boston Red Sox, and Florida Marlins. Dawson was an eight-time All-Star, as well as an eight-time Gold Glove winner who compiled a .279 career batting average, 2,774 hits, 438 home runs, 1,591 RBIs, and 314 stolen bases. Dawson is only the second player in baseball history to reach 400 home runs and 300 stolen bases. On July 25th, 2010 Dawson was inducted into the National Baseball Hall of Fame.

“Pitchers and catchers report this week to Spring Training, and plans are well underway for the 2020 Rickwood Classic,” said Friends of Rickwood Chairman Gerald Watkins. “We’re expecting a huge crowd as we celebrate the special 100th Anniversary of the Negro Leagues this summer. Make sure to make your plans early and experience America’s pastime at America’s Oldest Ballpark, Rickwood Field.”

In 2009, the Rickwood Classic was named the most desirable Minor League Baseball game to attend in a poll on MiLB.com. The following year it was named Minor League Baseball’s Promotion of the Year. Over 145,000 people have attended the Rickwood Classic since its inception in 1996 and it has been covered by dozens of local and national media outlets including HBO’s Real Sports with Bryant Gumbel, ESPN, and MiLB.com.

The Birmingham Barons are the proud Double-A affiliate of the Chicago White Sox. The Barons 2020 home opener at Regions Field will take place on Thursday, April 9th against the Rocket City Trash Pandas, Double-A affiliate of the Los Angeles Angels, with first pitch set for 7:05 p.m. For ticket information, game schedule, promotions calendar, or for additional information about Regions Field, visit barons.com or call (205) 988-3200.