PRESS RELEASE – Big Top Soccer has announced a new team in Green Bay, that will join USL League Two ahead of the 2019 season. The club will play its home games at the newly built Capital Credit Union Park in Ashwaubenon.

The launch is being led by Big Top Soccer’s managing director, Peter Wilt, as well as the ownership group that features Vern Stenman, Conor Caloia, Jim Kacmarcik and Steve Schmitt.

“We look forward to bringing USL soccer to the village of Ashwaubenon, and the greater Green Bay community. This is a great sports community and we’re excited to bring a high level of spectator soccer to Capital Credit Union Park and to grow soccer in northeastern Wisconsin,” the group said in a joint statement. 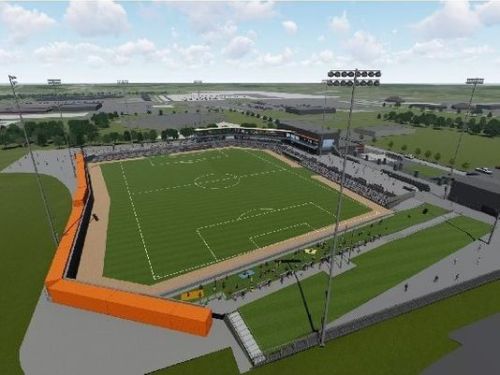 Green Bay will share a home with the Northwoods League summer collegiate baseball team, the Green Bay Bullfrogs, at Captial Credit Union Park. The new venue, which is located less than one mile from historic Lambeau Field, will open in May 2019. Capital Credit Union Park is a unique venue to the northeastern part of Wisconsin, as it is the only facility that can host both soccer and baseball.

Fans will have the opportunity to be a part of the naming process. There will be a one-week window to submit names. We encourage submissions that reflect the history, tradition, culture, or geography of Green Bay. Fans will then have a week to vote on the top submissions in a weeklong advisory poll.

The team will be led off the field by former MLS executive, Dannon Anderson as General Manager. “I’m looking forward to working with Green Bay and the surrounding area to build something special on the soccer field and in the soccer community as a whole. Capital Credit Union Park will be an excellent venue for us to play in and working with Peter Wilt and Brian Kamler to establish the team as one of the best in USL League Two, on and off the field, is an honor.” Said Anderson.

On the field the team will be led by former MLS All-Star, and De Pere resident, Brian Kamler. The veteran professional soccer player will serve as head coach and technical director. During a decorated career, Kamler won the 1998 CONCACAF Champions League, two MLS Cups and two US Open Cup titles. “It is an honor to have been chosen as the first head coach and technical director for Green Bay’s USL League Two team. I am excited to work with our outstanding ownership group, Peter Wilt, Dannon Anderson, and the Green Bay community in building something special here.”

“People in Green Bay and the Fox Valley take pride in their communities and support their teams from the high school level to the pros,” said Wilt. “The new Capital Credit Union Park will also be one of the finest venues of its size in the country. We believe the stadium and the team will be a source of pride and an opportunity for memorable experiences for the team’s fans.”

The team will also be a boost to the local community in Ashwaubenon. “We are very excited in joining Big Top to welcome a new level of soccer to our community. We look forward to new and exciting events like this at the new Capital Credit Union Park. The excitement for this facility is growing. Soccer is just one of many different events to come to this park.” Said Ashwaubenon Village President Mary Kardoskee.

The team is accepting season ticket deposits now. Fans can secure their spot for the 2019 season with a $25 deposit per seat. Season tickets start for as low as $75 for the Supporters’ Section, a primarily standing and singing area, up to $425 per ticket for a premium club experience that includes food and drink options. Fans who place a deposit will be entered in to a drawing to win two 2019 season tickets, 2019 season scarves, and a meet and greet with the team.

Fans can also place deposits for group ticket options. A single game suite will be available for $1,200 that includes premium food options, a self-service bar and personal wait staff. Tickets for club seats will be available for $40, with food and drink options included. Club seats with food and drink, plus access to an indoor, climate-controlled area will sell for $40. Tickets with access to the Party Deck will sell for $25.

Single game tickets will go on sale approximately one month before the season begins.

About Green Bay USL League Two: Green Bay is a member of USL League Two and will begin play in May, 2019 in the Heartland Division of the Central Conference. The team name, colors and crest are being developed with input from the public to build a team that truly represents the community. The team will play its home games at the new Capital Credit Union Park. The multi-purpose stadium opens in May at 2231 Holmgren Way, less than a mile from historic Lambeau Field, home of the NFL’s Green Bay Packers. It is very accessible throughout Northeastern Wisconsin, less than 30 minutes from the youth soccer hotbed of Appleton, WI and 15 minutes from the ten-field Azco Soccer Complex in Howard, WI. Information about Capital Credit Union Park can be found here.

About USL League Two: USL League Two is a pre-professional league affiliated with USL Championship, USL League One and Major League Soccer (MLS). Expected opponents in the Heartland Division include Chicago FC United, Des Moines Menace and St. Louis Lions. The proven developmental leader in North American soccer’s evolving tiered structure, USL League Two (formerly the PDL) features 75 franchises in four conferences throughout the United States and Canada, including 18 clubs that are owned and operated by a professional club, or that hold a partnership with a professional club. League Two has proven to be an important stepping-stone for top professionals now playing throughout the world, with more than 70 percent of all selections in the MLS SuperDraft since 2010 having PDL experience, including 66 selections in the 2018 MLS SuperDraft.