PRESS RELEASE – he Kenosha Kingfish announced today that Scott Preimesberger has been named as the General Manager. Preimesberger comes to Kenosha after spending the past five seasons with fellow Big Top Baseball team, the Madison Mallards. Big Top Baseball is the group that owns the Kingfish, Mallards, Wisconsin Rapids Rafters and Green Bay Bullfrogs of the Northwoods League. 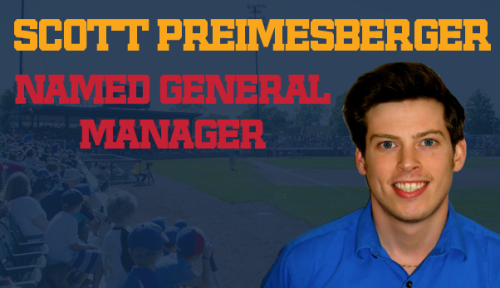 “I am excited to have the opportunity to be a part of such a great organization and such a great community,” Preimesberger said. “I am looking to build on the success the Kingfish have had and continuing the fun at Historic Simmons Field.”

Preimesberger comes from Madison where he had most recently worked as Assistant General Manager of the Mallards. In this role, he managed six full-time employees and was involved in all facets of the organization’s ticket sales operation. In 2017, the Mallards led the nation in attendance averaging 6,308 fans per game.

Prior to that role, Preimesberger had progressed through the organization starting as a seasonal employee working his way into a full-time role and then a management position. During his time in Madison, Preimesberger also played a role in the game presentation and fan experience at the “Duck Pond.”

“We believe Scott is the right person, at the right time to continue to grow the Kingfish brand and enhance the fan experience at historic Simmons Field,” Kingfish owners Steve Schmitt, Vern Stenman and Conor Caloia said in a joint statement. “We have a great full-time and seasonal staff and we are excited to have Scott the lead the staff and the organization to the next level.”

Preimesberger earned a Bachelor’s degree in Communication Arts from the University of Wisconsin-Madison and Master’s Degree in Sports Administration in from Valparaiso University in 2012. Preimesberger is originally from Appleton, WI.