Benjamin, a junior at Santa Clara University, joins the Pippins following a summer 2016 stint as the voice of the Kalamazoo (Mich.) Growlers of the Northwoods League. 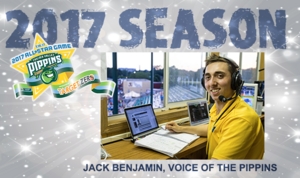 Benjamin joins a growing list of talented young broadcasters who have worked for the Pippins. Last year’s lead voice, Evan Budrovich, currently serves as Campbell University’s (NC) assistant media director and Ryan Rouillard (2014, 2015) was recently named the lead broadcaster for the Frisco RoughRiders, the Double-A Affiliate of the Texas Rangers.

“I am confident we have found another great young talent in Jack,” Pippins general manager Jeff Garretson said. “Not only does he have a lot of wood bat league experience, but he has a great voice and great baseball knowledge. I know Pippins fans will enjoy listening to him all season long.”

“I’m thrilled to become the next voice of the Pippins,” Benjamin said. “I look forward to providing fans with exciting and high-quality broadcasts night in and night out. Every season has its own unique storylines, and I look forward to discovering those and sharing them with Pippins listeners.”

Benjamin’s first game will be June 2, when the Pippins host Victoria, British Columbia, in the 2017 season opener, presented by Legends Casino and Hotel. On July 18, the Pippins will host the West Coast League All-Star Game, which will showcase the top talent from the summer league’s 11 teams in the Northwest. Season tickets and ticket mini plans – which include tickets to the All-Star Game — are available for purchase at Hunky Shaw’s Team Shop, 12 S. Second St. in the historic Larson Building in downtown Yakima. Ticket packages also can be purchased by calling 509-575-4487 or online at pippinsbaseball.com.