PRESS RELEASE – Walla Walla has established a tradition in the West Coast League of being the launching point for some of the nation’s best young broadcasters. Play-by-play artists that have started in Sweets Country (#SweetsCountry) now handle play-by-play and other communications responsibilities for properties such as Virginia Tech Athletics (Andrew Allegretta, 2010), Bryant University (Tristan Hobbes, 2011-12), University of Oregon and the Rancho Cucamonga Quakes (Zach Bigley, 2015-16).

With that proud heritage in mind, the Walla Walla Sweets are excited to announce the next talented voice to join the club with the hiring of Ben Farber as the team’s play-by-play broadcaster and media relations coordinator for the 2017 season. Farber will call the action for all 59 Sweets games on the club’s flagship radio station, 99.7 FM/ 1490 AM ESPN Walla Walla. 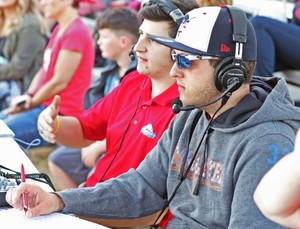 Farber, a native of New York City, joins the Sweets after working the last two summers in the New England Collegiate Baseball League. Most recently, he was the solo play-by-play voice for the New Bedford Bay Sox during the 2016 season.

A 2016 graduate of Macalester College, Farber used his college years to gain valuable experience both on and off the playing field. A right-handed pitcher for the Macalester Scots varsity baseball team, Farber is familiar with the daily rigors of college baseball. He also broadcast softball games as well as both men’s and women’s basketball during his time at Macalester. Farber currently writes for the Minneapolis Star Tribune, covering high school sports in and around the Minneapolis/St. Paul area.

“I’m thrilled to be a part of the Sweets for the 2017 season,” Farber said. “I can’t wait to get behind the mic every night and do what I love to do, and that’s bringing the action on the field right into your car, your living room, or wherever our fans are listening to the game.

“Plus, I’m excited to come out west and experience a new part of the country.”

“Ben’s ability to not only accurately call the action, but to paint the picture on the air was what drew me to him as our choice,” said team president Zachary Fraser. “He is also a strong writer, and so much of our communication with fans and the media is via the written word.

“I am excited that our community will be able to welcome such a talented young communicator into our Sweets Country family.”

Sweets fans will be able to catch Farber’s debut on Opening Night presented by Chrysler Dodge Jeep Ram of Walla Walla when the Sweets host the Wenatchee AppleSox at Borleske Stadium on Friday, June 2nd at 7:05 PM.