PRESS RELEASE – In addition to the new Daktronics (NASDAQ-DAKT) video displays coming to Greater Nevada Field, the field will feature a new Mr. Baseball, new wall pads, a third art mural, new artwork in the suite level from the Sierra Arts Foundation, and the return of celebratory strobe lights on the right-field berm, the Reno Aces and Reno 1868 FC announced today.

Mr. Baseball will have a new and improved look for the 2017 season, although his voice will remain the same for his famed “Seventh-Inning Stretch.” The original Mr. Baseball had a rather weathered look after eight long, successful years beyond the batter’s eye in center. 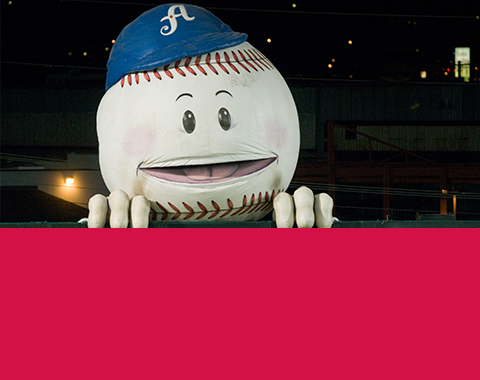 “Mr. Baseball has brought a signature moment and tremendous joy to Aces fans of all ages since 2009,” said Reno Aces and Reno 1868 FC president Eric Edelstein. “Through fan feedback, we made the decision to upgrade Mr. Baseball, knowing his new appearance will appeal to the masses this coming season.”

The Aces also extended their partnership with the Sierra Arts Foundation for an additional three years. Already with two art murals in the home plate gate entrance, Greater Nevada Field will feature a third mural within its premises. New artwork will replace last year’s displays in the suite level as well.

“Connecting to the growing art community in Northern Nevada has been a focal point of ours the last two years,” said Edelstein. “We are thrilled to extend our partnership with the Sierra Arts Foundation, and look forward to the new mural and artwork coming to Greater Nevada Field over the coming months.”

C&H Baseball will install new wall pads on the outfield fences, foul-territory walls and dugout rails, completing a 360-degree makeover to the existing pads which were installed ahead of the Aces’ inaugural 2009 season.

Greater Nevada Field’s improvements for 2017 culminate with the return of celebratory strobe lights on the right-field berm. The strobe lights will activate on Aces home runs and 1868 FC goals, among other highlight-worthy plays and moments in favor of the home team.