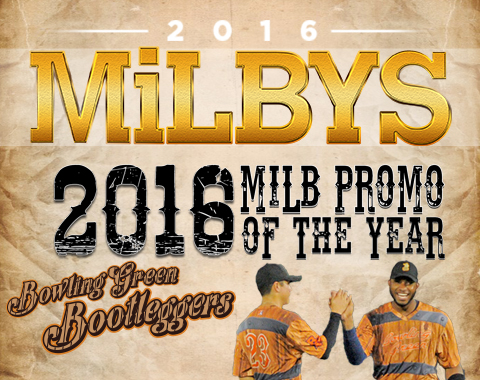 The idea for “Bootlegger Night” was brought on by past and present members of the Bowling Green staff, and served as a tribute to the “Hot Rod” aiding the bootlegging industry over a century ago as a way to outrun law enforcement. This rich bourbon heritage has since become synonymous with Kentucky, with over 35 distilleries present throughout the state.

“We are extremely pleased that this promotion was so well received, not only by our fans in South Central Kentucky, but across the country as well,” said Hot Rods General Manager Eric C. Leach. “It’s always fun that when you create a promotion that people immediately have a reaction towards and it was something that we noticed immediately when the promotion was announced in February.”

On July 16th, the Hot Rods completely transformed themselves into the Bootleggers by donning bourbon barrel inspired jerseys with the “Bowling Green” road wordmark across the front and custom hats. Fans were greeted with a mason jar giveaway featuring the Hot Rods Bootlegger. In addition, Moonshine was made available to purchase for patrons 21 and over, player headshots were converted to an outlaw theme, Bluegrass music was played throughout the game, and in-between inning promotions were tailored to complement the Bootlegging era. Exclusive Bootlegger t-shirts and hats were also available in the Hot Rods merchandise store during the game.

This is the second time since 2009 that the Hot Rods have won a Promo of the Year Award. In its inaugural season, the Hot Rods won the MiLB.com Promo of the Year vote for “What Could’ve Been Night” when the team took the field as the Cave Shrimp; a finalist from the “Name the Team” vote in 2008. This year’s Promo of the Year category featured nine additional teams and promotional nights that ranged from a Man vs. Marathon theme, ballpark weddings, and tributes to Prince and KISS. This category is best known for its creativity and overall execution of the theme night.

“We were the smallest market in the category and it’s a testament to our fan base that we were able to finish ahead of these other great teams and their promotions,” said Leach. “We are already looking forward to growing on the success of this season’s Bootlegger Night for the 2017 season.”

The Hot Rods open their ninth season in South Central Kentucky on Thursday, April 6th against the Fort Wayne TinCaps. Mini-plans and season tickets are now available for the 2017 season at the Hot Rods front office and online at BGHotRods.com.