PRESS RELEASE – The Lancaster JetHawks, High-A California League, announced today a new Player Development Contract with the Colorado Rockies. The agreement is for two years and will span the 2017 and 2018 seasons. The Rockies become the fifth affiliate in the JetHawks franchise history, replacing the Houston Astros who had been affiliated with the JetHawks for the past eight seasons.

“The JetHawks are thrilled to welcome the Colorado Rockies to Lancaster,” said JetHawks Chairman Jake Kerr. “They have a reputation of being a first class organization both on and off the field, and we couldn’t be more excited to have them as our affiliate for the next two years and beyond.” 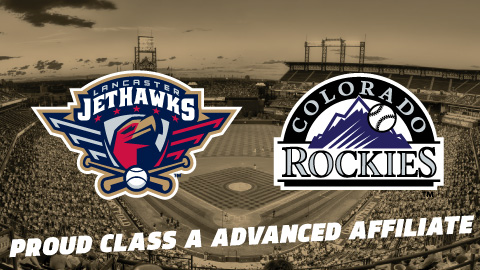 “Their commitment to building a winning organization while also giving back to the community makes the Rockies a perfect fit for us,” continued Kerr, “There is no doubt our fans will continue to see some great baseball at The Hangar in 2017.”

Prior to the 2016 season, the Rockies were the 4th-ranked farm systems in baseball according the MLB, with six of their minor leaguers listed in MLB’s Top 100 Prospects List. The Rockies are set to pick 11th overall in the 2017 First Year Player Draft in June.

“The Rockies are thrilled to partner with the Lancaster JetHawks and are excited to build new relationships with the JetHawks and their fans,” said Zach Wilson, Senior Director, Player Development for the Rockies, “Our ultimate goal is to maximize the potential of every player in the organization and we believe our new partnership with Lancaster will help us reach that goal.”

The JetHawks kick off the 2017 season at home on April 6 against the Visalia Rawhide. Full Season, Hawks Pack & Group Tickets are available now at jethawks.com or by calling 661-726-5400. For more information on the JetHawks, visit JetHawks.com or follow us on Facebook at facebook.com/lancasterjethawks.