PRESS RELEASE – The Kane County Cougars announced today that the budget has been approved to hold Political Corruption Night on Thursday, August 18 when they take on the Wisconsin Timber Rattlers in a 6:30 p.m. game at Fifth Third Bank Ballpark. To purchase tickets, visit http://www.kccougars.com or call the box office at 630-232-8811. 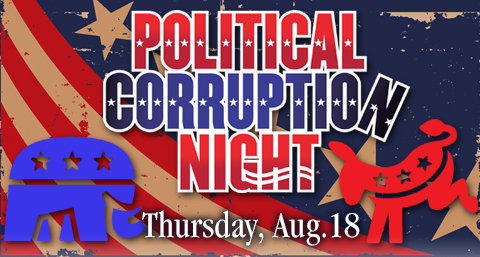 In an homage to the politically corrupt reputation that the state of Illinois holds, the team will poke fun at a variety of circumstances residents have experienced throughout the years. In a battle of the borders with Wisconsin, fans will cast their vote for their favorite team by selecting buttons at the entrance gates to be counted as a determinant of which state is the most reputable. However, Cougars staff members can’t guarantee that they won’t be stuffing the ballot boxes for their favorite candidate.

Traffic cones will be set up throughout the ballpark to aid in concourse congestion while various areas including bathrooms and the Cougars Den Team Store, will require a fee via the Cougars I-PASS system.

Fans that participate in on-field promotions will find that they may have a difficult time coming out victorious thanks to many of the contests being rigged possibly by Cougars management, including a certain mascot or two.

In addition, promotions will take on a politically corrupt theme including the “Water-balloon-Gate Slingshot” plus the first 1,500 fans through the gates, age 21 and over, will receive a can koozie giveaway courtesy of Miller Lite.