PRESS RELEASE – In honor of the 30th anniversary of the movie Top Gun, the Portland Sea Dogs will host Top Gun at the Ballpark, powered by Pratt & Whitney North Berwick Veterans Council, on Saturday, June 11th at 6:00 PM. 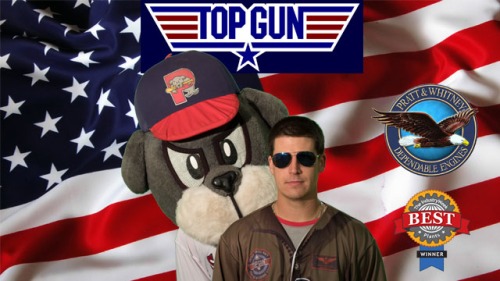 The Sea Dogs will wear specially designed Top Gun flight suit jerseys, which will be autographed and auctioned off online after the game to benefit the Pease Greeters.

The Pease Greeters is an organization based out of the former Pease Air Force Base in Newington, New Hampshire. Their mission is to welcome troops passing through Pease International Airport on their way to, or from, Afghanistan or Iraq, or any other areas of conflict in any part of the world. 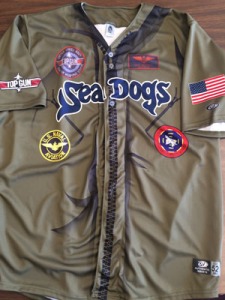 The night will include music from the Top Gun soundtrack and Top Gun trivia. Additionally, fans are encouraged to wear Top Gun costumes to the ballpark. Shirts and shoes are required at the ballpark…sorry no volleyball scene costumes.

The first 1,000 fans to enter the ballpark will receive a baseball key chain, courtesy of Pratt & Whitney. Also be sure to visit the Pratt & Whitney table in the concourse for displays and other promotional materials.

If anyone is willing to sing “You’ve lost that loving feeling” or “great balls of fire” at the ticket window, they will receive a $5 general admission ticket.

Additionally, fans that buy a ticket, and bring an item for to donate to a military care package, will receive an additional ticket FREE of charge (General Admission, Reserved or Skyview tickets only). The items received will be sent to Maine units serving overseas. List of Acceptable Care Package Items

Tickets for the game can be purchased online at http://www.seadogs.com or by calling the Sea Dogs Ticket Office at 207-879-9500.