PRESS RELEASE – Continuing their successful partnership both on the field and off, the Buffalo Bisons and Toronto Blue Jays today announced that the teams have signed a two-year extension of their current Player Development Contract. This extension will keep the Bisons as the Blue Jays’ Triple-A affiliate through the 2018 season.

“The support we’ve received from the Blue Jays’ player development and front office staffs has been everything we thought it would be and more when we began this partnership four years ago,” said Bisons Vice President/General Manager Mike Buczkowski. “It has truly been a partnership in every sense of the word and we’re looking forward to continued success in growing the baseball corridor from Western New York to the Greater Toronto area.” 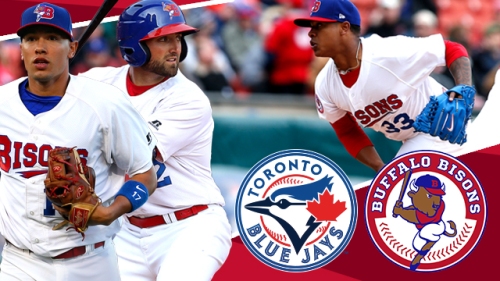 “We are excited to extend our PDC but more importantly our relationship with the Bisons. The most productive player development relationships are built upon two aligned organizations,” said Blue Jays President & CEO Mark Shapiro. “We are appreciative of the dynamic in Buffalo and feel that because of the Rich family, the exceptional front office and support of a great city – there is no one we would rather be affiliated with.”

In the first three seasons with the Blue Jays, the Bisons have won 219 games (219-212), the team’s most in a three-year span in almost a decade (2005-2007, 220). The Herd has produced seven International League midseason All-Stars since 2013 and four postseason All-Stars -DH Mauro Gomez (2013), OF Kevin Pillar (2014), RHP Bobby Korecky (2014) and INF Matt Hague (2015)- after a five-year span without one. Gomez led the IL in home runs in 2013 and Korecky topped all relievers in saves in 2014, while Hague was the league’s Most Valuable Player last season after winning the IL’s batting title and leading the circuit in many offensive categories.

The partnership has also seen many of the game’s brightest young stars graduate from their time in Buffalo to become key contributors to the Blue Jays’ 2015 American League East Division Title. Toronto’s ALDS roster last year featured nine players that were Bisons before they were promoted to the Blue Jays, including Marcus Stroman, Aaron Sanchez, Kevin Pillar and Chris Colabello. A total of 12 players on the Blue Jays’ postseason roster appeared at Coca-Cola Field at some point over the last three seasons.

Over 1.6 million fans have come to Coca-Cola Field over the last three seasons, including a total of 551,303 last season, which was the Bisons’ best attendance since the 2010 season. The Blue Jays have been instrumental in the success of promotional events like the Bisons’ Hot Stove Luncheon, ‘Blue Jays Weekend’ (this year May 21-22), Mystery Ball Charity Game (August 16) as well as themed giveaways (Marcus Stroman Bobblehead -May 21, Aaron Sanchez Bobblehead -August 10) each season. The Bisons have also welcomed new corporate sponsorships from Canadian businesses like Samuel Son & Co. Inc. and the Ripley’s Aquarium. Overall, the Bisons have seen double-digit Canadian fan growth throughout much of their business model, including individual and online ticket sales, merchandise sales and website traffic. The radio broadcast of several Bisons games have been aired by Toronto’s Sportsnet FAN 590 and Bisons team updates and highlights are readily available to Blue Jays’ fans at Rogers Centre.