PRESS RELEASE – Wednesday the Inland Empire 66ers announced their partnership with Blue Buffalo to create the first ever dog park in Minor League Baseball and the second in all of professional sports.

The Blue Buffalo Dog Park, which will be open during all Sunday games when fans can bring their dogs to the park, will be over 50 feet long and 25 feet wide. It will feature two separate spaces, one for smaller and one larger dogs. The Blue Buffalo Dog Park will make its debut at San Manuel Stadium during the Sunday, April 17th game against the San Jose Giants. 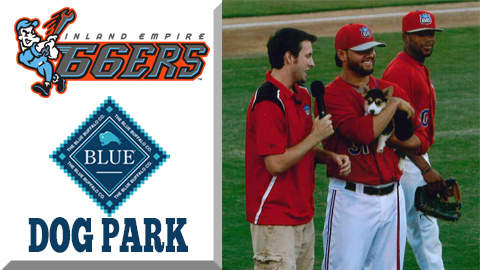 “The 66ers have always strived to provide the Inland Empire with a family friendly environment and first rate entertainment,” said 66ers General Manager Joe Hudson. “With the help of Blue Buffalo we are now able to extend that to man’s best friend as well.”

Blue Buffalo was founded over 10 years ago by the Bishop family after their dog Blue, a large-breed Airedale struggled with a history of health problems. Because they wanted to feed their dog like they would any family member, the Bishops were inspired to create a commercially available food using only the finest natural ingredients. Working with a leading holistic veterinarian and animal nutritionist, the Bishops developed BLUE Life Protection Formula® for dogs and cats. This product has become the #1-selling natural pet food in the United States.

In addition to the Blue Buffalo Dog Park, Blue Buffalo will be promoting pet cancer awareness at several California League stadiums throughout the course of the 2016 season. This includes a Sunday, May 15th date at San Manuel Stadium when the 66ers take on the Rancho Cucamonga Quakes at 2:05pm.