PRESS RELEASE – Happy Taco Tuesday. The Fresno Tacos are back. Last baseball season on August 6, amidst over 18,000 people drawn to Downtown Fresno for the annual Taco Truck Throwdown, the Fresno Grizzlies rebranded as the “Fresno Tacos” for one game only, defeating the Sacramento River Cats 7-4 at Chukchansi Park. 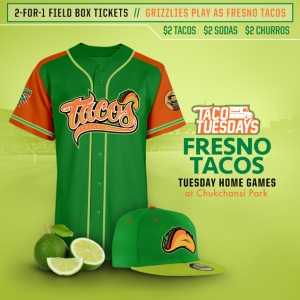 In 2016, the Fresno Tacos will return to battle Pacific Coast League foes not just for one evening, but for all 10 Tuesday home games at Chukchansi Park this season. “Taco Tuesdays” will also feature a different local taco truck for each game, showcased as a competitor for the 6th Annual Taco Truck Throwdown, which will take place on Thursday, August 18 as the Grizzlies Tacos take on Omaha.

New Fresno Tacos jerseys and caps – with a twist of lime – have been unveiled for the 10 Tuesday home games (see attached image and image below). New Fresno Tacos merchandise will be for sale at the Grizzlies Team Store as the season approaches. Need a new taco hat? Well, there’s taco hats, like the ones the players on the field will wear, and there’s “taco hats” in a more literal sense:

“Last season, there was some speculation that we might become the Fresno Tacos permanently, but to be sure, we’re prouder than ever of the Fresno Grizzlies,” said Tacos Grizzlies General Manager Derek Franks. “Coming off our first Pacific Coast League and Triple-A National Championship in franchise history, Growlifornia Republic is alive and growing. But we saw how special the Fresno Tacos were to our fans for just one night, and there’s no harm in multiplying that pride times 10 this season.”

Yes, the only team to visit Chukchansi Park twice on Taco Tuesdays is “Taco-ma.”)

If you’re scoring at home, that’s 35 total “tacos” in this write-up.