Homefront IPA Returns to Ballpark to Benefit ‘Hops for Heroes’

PRESS RELEASE – There aren’t many things more American than baseball, hot dogs, cold beer and our military. That foursome will come together in a big way for the second consecutive year as the Charleston RiverDogs and Palmetto Brewing Company partner to help raise funds for military-themed charity Soldiers’ Angels. 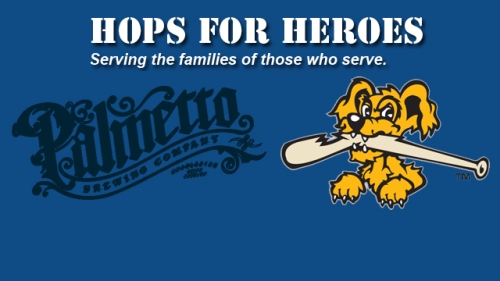 The Class-A affiliate of the New York Yankees will once again bring Palmetto’s Homefront IPA to RiverDogs fans in 2015, and all proceeds benefit Soldiers’ Angels. The RiverDogs will sell this special beer with the special slogan “Hops for Heroes” during their home game against the Kannapolis Intimidators on Saturday, July 11 to coincide with Military Appreciation Night at Joseph P. Riley, Jr. Park.

Aged on Louisville Slugger maple bats, Palmetto Brewing Company’s Homefront IPA is a big, bad citrus-forward IPA that means business just like the US military. This beer has an excellent balance of roasted malts and strong citrus aromas. This specially-made craft beer does more than just quench one’s thirst as it improves the lives of our soldiers because 100-percent of the proceeds will be donated to Soldiers’ Angels. Two of the solid maple bats used in the brewing process will be auctioned off during the game to raise added money.

“We are certain that our fans who enjoy a craft beer will definitely enjoy Homefront IPA while assisting our military troops and their families,” said RiverDogs General Manager Dave Echols. “We’re proud to bring this partnership and beverage back to the state of South Carolina and The Joe for the second year in a row.”

“Palmetto Brewing Company is honored to support this very worthy cause with the Charleston RiverDogs,” said Ed Falkenstein, Founder, Palmetto Brewing Company. “We recognize the service of our men and women in the Armed Forces and respect the sacrifice they and their families make every day. Donating 100 percent of our proceeds to this project is a small acknowledgment. Enjoy a Homefront IPA at the ball park with food and friends.”

Soldiers’ Angels is an organization whose mission is to ensure that “No soldier goes unloved.” Soldiers’ Angels provides aid and comfort to the men and women of the United States Army, Marines, Navy, Air Force and Coast Guard and their families, along with a growing veteran population.

The RiverDogs return home and open a nine-game homestand on Saturday, July 4 against the Rome Braves. Tickets are on sale for the remainder of the RiverDogs 2015 season. For more information, please contact the Riley Park Box Office at 843/577-DOGS (3647) or online at http://www.riverdogs.com. If fans cannot make it to the ballpark, they are encouraged to tune in to all the action this year both home and away worldwide on http://www.riverdogs.com and locally on 1250 WTMA, the RiverDogs’ radio home.