PRESS RELEASE – The West Virginia Power will host their fourth annual Redneck Night on May 23, 2015. The Davisson Brothers Band will perform a concert from 5:30 until 6:30 and then again after the game. This award-winning theme night will also serve as the finals to a new singing contest called Redneck Idol. The Power will team with 96.1 The Wolf to help one aspiring musician along the path to stardom. 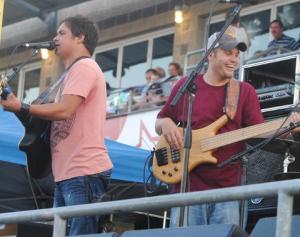 “We have had some fun over the years with this promotional night,” stated Tim Mueller, the General Manager of the West Virginia Power. “In year four, the decision was made to add a new contest and this should help bring some talented musicians out to showcase. Plus we have added one of the state’s top musical acts to add to the fan experience.”

The night will also include a camo hat giveaway presented by Ford and an appearance by members of the cast of Appalachian Outlaws on the History Channel.

Potential Redneck Idol contestants should record either an original track or cover and upload their submission to YouTube. Once uploaded, links should added the to registration form on 96.1 The Wolf’s website, no later than May 13. The radio station will place the submissions on their website (961thewolf.com) for voting, which will run from May 13 though 20.

The top three vote getters will be invited to perform approximately 45 seconds of their song on May 23 at Appalachian Power Park during the West Virginia Power’s game against the Delmarva Shorebirds. Each of the three finalists will received four free tickets to the game.

In-stadium fan voting will determine the winner of Redneck Idol. The winning musician will receive two tickets for every Power home game remaining during the 2015 season, a gift certificate from Mountain Stage and a four hour package from Hilltop Studios. The winner can use this studio time to record two songs for use as a demo.

All contestants must be 21 to enter and other rules and restrictions apply. See the official contest rules by clicking here.