PRESS RELEASE – The Kane County Cougars, in conjunction with Peoria Charter Coach Company and with the help of the Cougars’ social media followers, have unveiled the design of the Cougars’ newly-branded team bus for the upcoming 25th anniversary season. The Cougars bus will make its debut at Fifth Third Bank Ballpark the week of April 6 and fans will have several opportunities that week to view the bus, including Opening Night on April 9. 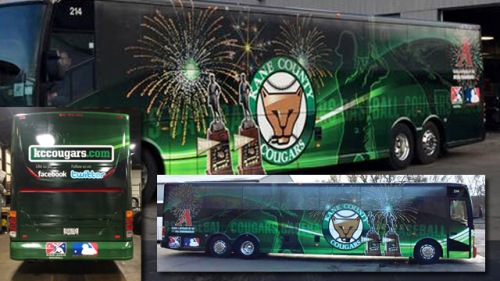 The innovative design was created by Cougars Graphic Designer Emmet Broderick and incorporates several visuals that are part of the Cougars’ 25-year history including fireworks, two championship trophies recognizing the 2001 and 2014 titles, Major League Baseball and Minor League Baseball logos, and the Arizona Diamondbacks logo to signify the Cougars’ relationship with their Major League affiliate.

“The sense of motion in the player background pattern of the design really lends itself well to the moving nature of the bus as the Cougars travel throughout the Midwest League this season,” said Cougars Graphic Designer Emmet Broderick.

“We’d like to thank Peoria Charter Coach for their support of this idea and for their great partnership over the years,” said Cougars Director of Public Relations Shawn Touney. “While we’re celebrating our 25th anniversary season in 2015, we’re also celebrating our 5th season with Peoria Charter Coach as the official carrier of our team and staff.”

“After 74 years in business, we are proud to announce that the Kane County Cougars will be the first team in our history to have a wrapped charter bus,” said Peoria Charter Coach President and Owner Bill Winkler. “We could not think of a better team than the Cougars to associate with our name. Thank you to the players, staff and fans for the support that has been shown to our company these last five years. We look forward to a long-lasting partnership.”

“Today’s announcement adds another element of excitement for our upcoming season at Kane County,” said Arizona Diamondbacks Director of Player Development Mike Bell. “We’re looking forward to a great partnership with the Cougars as part of their 25th anniversary season.”

For more information on the Kane County Cougars and the organization’s upcoming 25th anniversary season which begins on April 9, fans can visit kccougars.com. Fans are also encouraged to ‘like’ the Cougars on Facebook while following the team via Twitter and Instagram at kccougars.