PRESS RELEASE – The Rockland Boulders released their partial promotional schedule for the upcoming 2015 season this afternoon. A total of 54 home games will be played on 53 days with entertainment ranging from the Phillie Phanatic to Midget Wrestling and Mad Chad Taylor’s chainsaw juggling act! 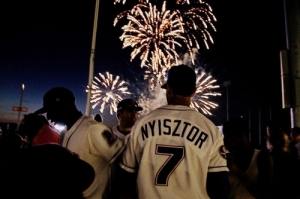 Along with these new additions to Provident Bank Park, fan-favorites such as “Irish Heritage Day”, “Military Appreciation Night” and “Disco Night” will all return to the Lower Hudson Valley as the Boulders look to repeat as Can-Am League Champions.

”We are booking championship entertainment to go along with our championship team,” said Ken Lehner, President. “We are going to run the gamut from crazy to zany and everything in between when it comes to entertaining our fans this summer.”

Rockland’s “Bould Defense” begins on Thursday, May 21 with the start of “Championship Weekend,” a celebration of the franchise’s first ever league title. Opening Night will feature a special pre-game ceremony during which members of the 2014 Rockland Boulders will return to receive their Championship Rings, as well as, unveil the Championship banner before taking on Trois-Rivieres. The first 1,000 fans in attendance will receive 2015 magnet schedules, courtesy of Sterling National Bank.

That night also marks the first of 10 “Thirsty Thursdays” over the course of the summer. Along with $1 Bud and Bud Light drafts, fans who show proper ID will be able to purchase a special $3 Mystery Craft Beer in the Boulders Brew Pub. Each Thursday home game will feature a different mystery craft beer for fans to enjoy. Thursday nights will also feature live post-game acoustic performances outside the Brew Pub.

“Pups in the Park” returns on Sunday, May 24 with 1,000 dog bandanas being given out, courtesy of the Duke of Oil & Tune. Sunday will also see the return of the ever popular “Kids Run the Bases” after the game.

On Memorial Day, May 25, the Boulders welcome in league newcomer Ottawa for “Let’s Play Two Day.” This special scheduled doubleheader will begin at 1:00 pm and feature a pie eating contest between games. Mondays during the 2015 season are also “Kids Eat Free” day for members of the Rockland Boulders Kids Club. To join the Kids Club register at http://www.rocklandboulders.com

For the third consecutive year, “Western Weekend” comes to Provident Bank Park June 5-7 as the Boulders host the Gary SouthShore RailCats of the American Association. This country-fried weekend will include a foam cowboy hat giveaway (June 5), a Dave & Buster’s mini-bat giveaway (June 6), as well as a cow pie tossing contest.

Rockland will welcome the Shikoku Island League All-Stars to the Lower Hudson Valley June 18-21 as part of “Far Eastern Weekend.” The weekend will pay tribute to our Japanese visitors and feature Teacher Appreciation Night, presented by Ramapo College of New Jersey, on June 18, Bergen Boulders Day on June 19, and BoulderBird’s 5th Birthday on June 20. That Saturday night will also include live midget wrestling after the game featuring Lil Kato. As it has each year, Father’s Day, on Sunday, June 21st will feature a special post-game catch with Dad on the field.

The Fourth of July weekend celebration will once again be a staple of the summer and feature a 3-D Fireworks Extravaganza courtesy of Ramsey Automobile Group on Friday, July 3 while Saturday, July 4 will have the 5th annual coin giveaway, courtesy of Clarkstown Coin & Jewelry, in addition to the Boulders annual hot dog eating contest during the game against the Garden State Grays.

Friday, July 10 is “Military Appreciation Night,” including a Rockland Boulders camo cap giveaway. All current and former military members will receive special discounts as the Boulders honor those who have and continue to serve in the armed forces.

On Saturday, July 11, the Boulders will host their annual “Pink in the Park” game where players will wear special pink jerseys. Last season the Boulders set an all time individual game attendance record as 6,329 attended to show their support for this cause. Fans will have a chance to receive exclusive pink t-shirts and an opportunity to participate in the fourth annual Diamond Dig, sponsored by Clarkstown Coin & Jewelry.

For the first time in six years, professional baseball returns to historic Doubleday Field in Cooperstown, NY, when the Boulders host the New Jersey Jackals at 2:00 p.m. on July 17 in the first ever “Can-Am Cooperstown Classic.” All season ticket holders and corporate partners will be invited as special guests of the Boulders with fans having the chance to receive complimentary tickets from the team website at a later date.

The 5th Annual Irish Heritage Day, presented by Austin’s Ale House, returns to Provident Bank Park on Saturday, July 25 with gates opening at 3:30 pm. Pre-game festivities will include live music with performances by Bangers and Mash plus U2 Nation, while Rockland tangles with Fargo-Moorhead.

August 1 marks the return of “Disco Seth” as the Voice of the Boulders once again struts his stuff in a leisure suit as the Boulders host their 2nd Annual Disco Night, including pink disco wig giveaways to the first 1,000 fans in attendance.

Other key August promotions include Thursday, August 6, which is “Ladies Night” at the ballpark with drink specials available for female fans.

Two weeks later, on August 20, the Boulders will host “Cave Man” night with 1,000 HealthSav Koozies being handed out prior to the game. “80s Night” comes back on August 21 with The Ronald Reagans performing after the game.

Saturday, August 22 is “Carnival Night” at the ballpark, headlined by Mad Chad Taylor. Known as the Evil Knievel of comedy, Taylor has been featured in a Progressive Insurance commercial, and the Guinness World Record holder will bring his chainsaw juggling act to Provident Bank Park both prior to and during the game.

Along with special theme nights, the Boulders will host recurring promotions throughout the year. Each and every Sunday game will be followed by “Kids Run the Bases.” Monday night games will also be “Kids Eat Free” days for all members of the Rockland Boulders kids club, while Thursdays are for adults as Thirsty Thursdays feature $1 domestic beers and $3 mystery craft beers. Plus, live music is featured post game on almost every Friday and Saturday night on the Sani Professional Stage.

Other promotional theme nights fans can expect to see in 2015 include the annual “Christmas in July” game, decorated by Christmas Decor (July 24), “Fan Fiction Night” and “811 Dig Day” (July 31), “Middle Child Appreciation Night” (August 19), Beach Day (August 23), the 3rd annual “Cheapskate Night” (September 1) and finally Fan Appreciation Day (September 4). Below is the 2015 partial promotional schedule, including performers and theme nights. Additional performances, theme nights and giveaways will be announced at a later date with each being subject to change.

Sunday, July 12 – Pups in the Park; Kids Run the Bases

Wednesday, September 2 – Back to School Night

Thanks to John Cerone for the heads up.