PRESS RELEASE – The Frisco RoughRiders, the Double-A affiliate of the Texas Rangers, will pay homage to one of television’s classic 1990s shows on Friday, June 12 when the team hosts a “Full House” theme night at Dr Pepper Ballpark. The team will wear special uniforms for its home game against the San Antonio Missions and actor Dave Coulier, who played “Uncle Joey” on the hit show, will be on hand to join the celebration. 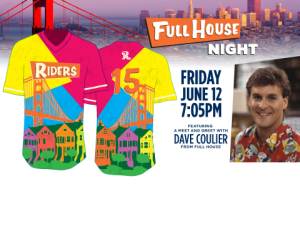 Coulier will sign autographs at a meet-and-greet with fans and throw out the ceremonial first pitch before the game. The RoughRiders’ custom “Full House” uniforms feature some of the iconic shots of San Francisco depicted in the show’s opening credits, including the Golden Gate Bridge and “Painted Ladies,” as well as “Riders” written in “‘Full House’ font.”

“Full House” themed videos, skits and games will entertain fans throughout the night. Additionally, the Riders will hold a contest where one lucky fan will win a free trip to San Francisco. A spectacular fireworks show will follow the game, accompanied by classic music from the ’90s.

The 13th season of Frisco RoughRiders baseball begins on Thursday, April 9 at 7:05 p.m. when the Riders take on the Arkansas Travelers in what promises to be an unforgettable experience. Opening Day will be the season’s first Thirsty Thursday/Groovy Grubesday and marks the first game in a new era of Riders baseball, with the debut of the club’s new logo, uniforms and color scheme.