PRESS RELEASE – The Birmingham Barons and Friends of Rickwood are happy to welcome baseball fans back to historic Rickwood Field for the 20th Annual Rickwood Classic presented by State Farm Insurance in 2015. Set for Wednesday, May 27th, the classic celebrates the 20th anniversary of the first throwback game, played in 1996, and turns back the clock to the 1948 season. 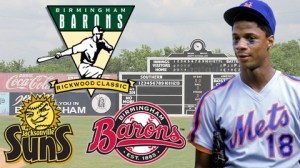 The 12:30 p.m. contest features the Birmingham Barons squaring against the Jacksonville Suns, the Double-A affiliate of the Miami Marlins. Former Rookie of the Year, eight-time Major League Baseball All-Star, and four-time World Series champion Darryl Strawberry headlines the game as the Guest of Honor and is available for autographs during the game.

[View a panoramic video of inside Rickwood Field from BallparkBiz.com]

This is the third appearance for the Suns in the classic, having previously played in the contest in 2007 and 2008. The Rickwood series between the two clubs is tied 1-1 as the Barons defeated Jacksonville 3-2 in 2007 and the Suns picked up a 4-2 win the following year. During the 19-year history of the Rickwood Classic, the Barons are 9-10. Birmingham won the first classic 3-2 over the Memphis Chicks in front of a crowd of 10,334, but fell 5-2 last season to the Mississippi Braves. The first Barons squad to take to Rickwood Field since the team departed after the 1987 season fielded a talented roster, headlined by Magglio Ordonez, Pete Rose Jr., Craig Wilson, Greg Norton, Frank Menechino and Barons’ Hall of Fame member Mike Cameron. Left fielder Jimmy Hurst lifted Birmingham over the Chicks with a 2-for-4 performance, including an RBI. Starting pitcher Mike Heathcott picked up the win.

This year’s game celebrates the 1948 season, the theme of the first classic, and the Barons fourth Dixie Series title. Birmingham joined the Southern Association in 1901, and the Dixie Series was played between the playoff champions of the Southern Association and the Texas League. The Barons claimed the series (4-1) over Fort Wayne that year to nail down one of six Dixie Series championships it won from 1920-1950, and 1967. The Barons were led that year by slugger Walt Dropo, who amassed 14 home runs and a .359 batting average. The Black Barons also won the Negro American League title the same season behind the talents of a 17-year-old outfielder, Willie Mays, patrolling the greens at Rickwood.

The uniforms to be worn are exact replicas of the 1948 flannels. The white jerseys feature “Barons” written across the chest in red, outlined in navy blue. The jerseys and pants include navy trim, and the hats the same blue with a white “B” on the front.

“We are excited to celebrate the 20th annual Rickwood Classic by revisiting the first Classic and honoring Birmingham Baseball during the 1948 season,” said Barons General Manager Jonathan Nelson. “This is a very special event in the Birmingham community and has gained national recognition. It is a must-attend baseball game, and we are looking forward to another fun and memorable afternoon at America’s oldest ballpark with the Friends of Rickwood and State Farm Insurance.”

“The Friends of Rickwood are extremely excited about the 2015 Rickwood Classic,” said David Brewer, Director of the Friends of Rickwood. “Celebrating the 20th anniversary of this great event is significant in terms of the ballpark’s history, but also in terms of our community’s history. The support of the Birmingham community has contributed immensely to the revitalization of the ballpark and to the success of the annual Rickwood Classic, and the Friends organization remains grateful for that continued support. We appreciate greatly our partnership with the Birmingham Barons, State Farm Insurance and the City of Birmingham, and we are excited to welcome Darryl Strawberry to Rickwood Field as this year’s special guest.”

Strawberry spent 17 seasons in the Majors, was elected to eight consecutive All-Star games from 1984-90 and was named National League Rookie of the Year in 1983. During his career, Strawberry suited up for the New York Mets, Los Angeles Dodgers, San Francisco Giants and New York Yankees. The slugger won his first World Series title in 1986 with the Mets before winning three with the Yankees (1996, 1998, 1999). The outfielder led the league with 39 home runs and a .545 slugging percentage in 1988 to claim his first of two Silver Slugger awards. Currently, the former big leaguer and his wife, Tracy, are pastors and the founders of Strawberry Ministries.

“There is no other game in baseball with the rich history of the Rickwood Classic,” said State Farm Marketing Analyst Cathy Warren. “That is one of the many reasons that State Farm is pleased to sponsor this game for the 12th consecutive year.”

The Rickwood Classic was named Minor League Baseball’s Promotion of the Year in 2010, deemed the most desirable Minor League Baseball game to attend in a poll on MiLB.com in 2009, and was included in the “101 Things All Sports Fans Must Experience Before They Die” column written by ESPN.com’s Jim Caple. Over 120,000 people have attended the Rickwood Classic since its inception in 1996 and has been covered by dozens of local and national media outlets – including HBO’s Real Sports with Bryant Gumbel.

Birmingham opens the 2015 season Thursday, April 9 as Regions Field hosts the Mobile Bay Bears at 7:05 p.m. Tickets for both opening night and the Rickwood Classic are currently on sale and are available for purchase online, by phone or in person at the Joe Drake Ticket Office at Regions Field. For more information about the Barons Regions Field and the complete 2015 schedule, please call (205) 988-3200 or visit http://www.barons.com, http://www.facebook.com/birminghambarons or on Twitter: @bhambarons.