Voice of Generals Moves On to Shuckers

PRESS RELEASE – Chris Harris, the radio broadcast voice of the Generals since 2009 has accepted the position of Director of Media Relations and Broadcasting with the new Biloxi Shuckers (MIL) franchise of the Southern League. Harris was the Generals’ Manager of Media Relations and Broadcasting from 2009-14 and promoted to VP of Communications in September.

“This is a tremendous opportunity for me and my career,” said Harris. I am grateful and humbled by the Biloxi franchise in entrusting me with this role. “It’s very bittersweet leaving Jackson and West Tennessee and I can never be thankful enough for the opportunity I was given back in 2009 by Jason Compton and Tom Hanson. Leaving Jackson, where I have made so many friends and memories isn’t easy, but I am excited for the next chapter of my life.” 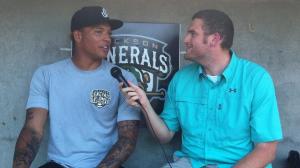 “To all the fans and supporters of the Generals, it has been a true privilege to be the Voice of the team. I have grown a lot as a broadcaster and person because of so many great people. The Mariners organization is class from top to bottom and it has been fun getting to know so many great coaches, players and front office personnel. For all the “Kiss it Goodbyes” on home runs, salutes to Dave Niehaus‘ “Get out the mustard and rye bread” grand slam calls and “Jackson General Winners”, it’s been a blast.”

Harris was the 2013 Southern League Broadcaster of the Year and for the last eight years, Chris has been an integral part for the TSSAA Radio Network and will continue this work in some capacity. Prior to joining the Generals, he was Voice of his college alma mater, Bethel University’s basketball and football teams as well as hosting a weekday afternoon talk show on ESPN 96.5.

Harris is a Lexington, Tenn native and graduate of Jackson Christian where he was a standout in baseball and basketball, having his name in the TSSAA baseball record books in several offensive categories.

Harris will continue with the Generals through the end of January. The Generals are in the process of finalizing a replacement for Harris and will be announced in the coming weeks. The club asks for no emails or phone calls about the position.

The Generals open the 2015 season on April 9th at Jacksonville and will open the home schedule on Wednesday, April 15th, against the Mississippi Braves. Season, Flex and Group tickets are available now for the 2015 season by calling 988-5299 or visiting jacksongeneralsbaseball.com.

One response to “Voice of Generals Moves On to Shuckers”