PRESS RELEASE – Brad Golder, the radio broadcast voice of the Great Lakes Loons since the team’s inception, is stepping down as the team’s play-by-play announcer to pursue other opportunities. 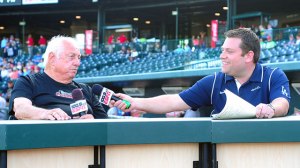 “This was an extremely difficult decision for me but it was the right time to leave and pursue other opportunities,” Golder said. “I am so thankful for the Great Lakes Loons for believing in my abilities as a young broadcaster and giving me the forum to grow professionally.

“I am going to miss calling Loons games, interacting with our incredible fans and watching the future generation of Dodgers play at Dow Diamond, but I am looking forward to starting a new chapter of my life.”

Golder has also worked for the Detroit Lions and Atlanta Braves radio networks.

“Brad has done an amazing job for the Loons,” said Loons Vice President and General Manager Scot Litle. “He really built the Loons radio broadcasts and delivered great play-by-play calls for us the last eight years. It is rare to be able to keep a talent at Brad’s level for so long and we feel very fortunate to have had him.”

Golder will continue with the Loons and ESPN 100.9-FM through the end of February to finish out the basketball season and to assist in the transition to his replacement.

“It’s been a pleasure working with Brad these past eight seasons,” said ESPN 100.9-FM General Manager Jerry O’Donnell. “His contribution to our organization has been outstanding. We wish him the best in the next phase of his career.”

The Great Lakes Loons are an eighth-year Single-A partner of the Los Angeles Dodgers. For tickets and more information, visit Loons.com or call 989-837-BALL.