PRESS RELEASE – The Atlantic League of Professional Baseball (ALPB) and Dakota Baseball, LLC jointly announced the acquisition of the Lancaster Barnstormers from Opening Day Partners (ODP), effective immediately. The transaction creates local ownership and operation of the Lancaster Barnstormers as part of a transition plan conceived by Dakota Baseball and ODP. 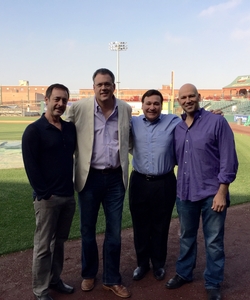 The Dakota Baseball group features experienced business operators that enjoy deep local ties, financial stability and a strong commitment to the Lancaster community. Dakota Baseball, LLC is made up of Lancaster residents; Ian Ruzow, Rob Liss, Steve Zuckerman and Bob Zuckerman, all previous founders and executives of Clipper Magazine. The members of Dakota Baseball have been minority owners of the Barnstormers since their inception in 2005. Rob Liss, who has been at the helm throughout the 2014 Championship season, will continue in the management of the club, along with his three partners.

“We are delighted to complete the transition to local ownership and operations,” said Ruzow. “As residents of Lancaster we feel a special bond to the community and look forward to providing the joy of affordable baseball and family entertainment to our friends and neighbors for years to come.”

The new owners have been working behind the scenes to make sure that the baseball experience in Lancaster not only continues, but is greatly enhanced by improved marketing of non-game day activities, new experiences at the ballpark and some soon to be announced exciting changes for 2015. They are also embarking on the renovation of the skybox suites in 2015.

“Skybox renewals are under way and already the majority of the skyboxes have been leased,” said Liss. “Visitors to the ballpark in 2014 already saw positive changes at the stadium, and the leasing of the skyboxes should be complete soon.”

“This transition will serve to make the Barnstormers even stronger ambassadors of Lancaster County and reflects the Atlantic League’s ongoing commitment to local ownership,” said Zuckerman. “No one knows communities better than its citizens and no one is more committed to Lancaster than the Dakota Baseball group. We have lived here for over 30 years and will make the Barnstormers stronger and enhance the League as a whole.”

“We are extremely proud of what we have accomplished in Lancaster County and each of the Atlantic League communities we have served,” said ODP Chairman Peter Kirk. “With the change to local ownership nearing or at completion in several markets where we have founded clubs, we feel the time is right for us to focus on our home market of Southern Maryland.” ODP will now concentrate its efforts solely on the operation of the Blue Crabs organization.

“Opening Day Partners has proven to be the most prolific organization of its kind in minor league baseball over the past 25 years,” said Atlantic League President Rick White. “In that span, they have designed, constructed and operated more minor league ballparks than any other organization in professional baseball and have opened four of the eight markets currently playing in the Atlantic League. This is a step in their company maturation that has been on the horizon for some time. This transition will make the Atlantic League even stronger in each community we serve.”