SPN.tv is a team specific media network that will include exclusive Somerset Patriots content, shows, and features that will run all year long. SPN.tv will have unique content updated on a regular basis that will serve as a web based TV network. 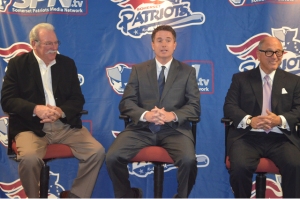 “SPN will take the Somerset Patriots to the next level of the ever evolving media industry and help entertain our fans worldwide all season long. With exclusive programming and live streams of games, SPN will give viewers an unprecedented look at our team on and off the field in a very fun way,” said Steve Kalafer, Chairman of the Somerset Patriots Baseball Club.

SPN.tv will feature a variety of Somerset Patriots based shows that highlight the team on and off the field. Shows will include everything from highlights, player features, educational programs, and much more.

The current schedule is highlighted by the “Sparky Lyle Show,” which will be a weekly program where Lyle will sit down and talk about his career with the New York Yankees, the Somerset Patriots, and other baseball topics of interest to viewers.

The Somerset Patriots will video stream 20 home games live on SPN.tv during the 2014 season through a partnership with Broadcast Venue. This is the first time that the team will have video broadcasts of games since early in the team’s history.

The Somerset Patriots will also continue its sixteen year partnership with WCTC 1450 AM for the team’s radio broadcasts and live radio streams of all 140 games.

Justin Antweil will serve as the on-air broadcaster for both the live video and radio streams of the games.

For information about SPN.tv and the Somerset Patriots 2014 Season presented by Ford, beginning at home on Friday, April 25th, stop by TD Bank Ballpark, call (908) 252-0700, or visit the Patriots on-line at www.somersetpatriots.com.

Thanks to John Cerone for sharing the news.