PRESS RELEASE – As the start of the 2014 baseball season fast approaches, the rebuilding process at Fifth Third Ballpark after the January 3 fire is well underway and on schedule to meet completion dates. In addition to rebuilding the first base concourse and suite level, the Whitecaps are also making several key improvements to the ballpark. 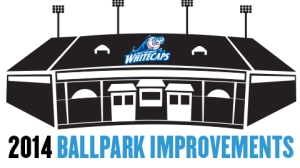 Whitecaps management has been working closely with Progressive AE and Wolverine Building to complete the rebuilding and remodeling process. When fans arrive on Tuesday, April 8 for Opening Day, the ballpark’s first base structure will be fully enclosed and under roof, an enlarged first base main concessions stand will be open for business, first base restrooms will be open, and a new souvenir shop will be open in the home plate section, replacing the former administrative offices.

The souvenir shop will be moved from its former location down the third base line to the home plate section, where the old front office was located, and will be approximately three times the size of the old shop. This improvement will allow a larger variety of inventory as well as an ability to serve more customers in a more comfortable, spacious setting. The new shop will be named “CapSized,” which relates to both the Whitecaps water theme and the number one selling retail item, sized caps, and will even feature an eight foot boat in the middle of the shop that will serve as a display for novelty items such as baseballs, mini bats and foam fingers. The shop will offer improved accessibility by providing outside access on non-game days as well as two entrance points during games. In addition, a ticket window for advance sales will be located inside the shop.

The first base main concessions stand is being rebuilt to a slightly different footprint that provides an additional 1,700 square feet. This extra space will allow for a redesign of the interior for faster and better customer service and will also provide two additional points of sale. 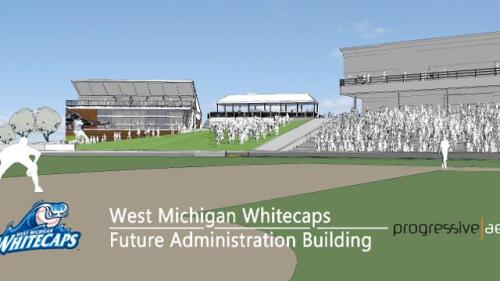 While the façade of the ballpark will appear back to normal after the fire, the suites, home clubhouse and secondary concessions stands will not be completed by opening day. These locations are targeted to open no later than June 17, the date of the Midwest League’s 50th All-Star Classic, which will be hosted by the Whitecaps. In the meantime, fans will have plenty of food and beverage options, with portable carts set up on the first base concourse to take the place of the secondary concessions stands still under construction.

The home team will utilize the visitors’ clubhouse on the third base side for approximately the first month of the season while a larger, redesigned home clubhouse is being built. The new clubhouse will be redesigned to include an improved laundry facility, an upgraded, larger weight room, better coaches’ offices and additional storage space. The visiting teams will use an on-site temporary trailer complete with showers, offices and restrooms, located in the parking area, until the home clubhouse is complete

The luxury suites on the third base side of the ballpark will be open in time for the start of the season, and each suite will feature a new short, wide window at the top of the hallway wall that will bring natural light from the suites into the hallway. The broadcast and public address booths in the home plate suite level section will be made visible to fans by the addition of half-wall windows. The home plate suite level “Bullpen Bar” will be doubled in size.

The first base suites will open at a later date, and when they do, suite guests will enjoy a wider hallway, deeper and taller suites, and upper wall windows allowing natural light into the suites. The Supersuite (an extra-large suite with capacity of up to 75) will be reconfigured to add significantly more square footage and a much better traffic flow to and from a redesigned bar and serving area. Suites 307 and 308 will feature an adjoining door to accommodate larger groups.

Whitecaps CEO and Managing Partner Lew Chamberlin said the decision to proceed with these improvements, many of which had been previously planned, in conjunction to the rebuilding of the facility made financial sense.

“The unfortunate occasion of the fire has placed us in a position where we can make these improvements now while the stadium is already under construction at a substantially lower cost than if we were to undertake them from scratch at some future date,” Chamberlin explained. “There are a number of economies of scale, not the least of which is avoidance of demolition costs, that we can take advantage of now that wouldn’t be available later.”

Future improvements to the ballpark, set for completion in time for the 2015 season opener, include a new administrative building being planned down the right field line between the first base grill and the playground, and a craft brew bar area in the old souvenir space on the third base side.

Construction on the new front office structure will begin this fall. It will provide more administrative space as well as additional storage space. The building will feature a rooftop deck grill area with a spectacular view of both the baseball field and the Grand River. In the meantime, the front office staff will continue to operate out of the temporary offices at 5716 West River Drive and will use the old souvenir shop as a temporary on-site office.

The ticket office at the ballpark will open for ticket sales on April 5.

“The last few months have been a real challenge, but thanks to the hard work of our staff as well as the admirable efforts of the folks at Progressive AE, Wolverine Building and all of their subcontractors, we are seeing the light at the end of the tunnel and we look forward to showing off the new and improved facility to West Michigan on April 8,” said Chamberlin.

A live webcam of the first base concourse rebuilding progress is available for viewing at www.whitecapsbaseball.com (halfway down the home page under the “Inside the Whitecaps” section.

The Whitecaps’ 2014 home opener is scheduled for Tuesday, April 8 at 6:35 p.m. against the Wisconsin Timber Rattlers. Tickets for all 2014 games can be purchased by calling the Whitecaps front office at 616-784-4131, by visiting http://www.whitecapsbaseball.com, or in person at the temporary administrative offices located two miles north of the ballpark at 5716 West River Drive NE in Belmont, at the White Pine Trail overpass. The ticket office at this location is open from 10 to 5 p.m. Monday through Friday. Please note that due to construction, Fifth Third Ballpark is not open to the public at this time.