“The website will allow us to reach out to our fansand our fans back to us,” Director of Operations Noel Zanchelli said. “We will have the ability to build our brand as a community–centered organization. 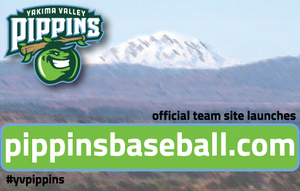 The website will give fans the opportunity to be involved and engage with the team and front office. In addition to standard news and photos, the site will connect directly with the team’s Facebook, Twitter, Instagram accounts, and later this spring, YouTube channel.

Community information from job opportunities to host family information will be publicized throughout Pippinsbaseball.com, and fans will be able to get tickets online that can be sent directly to their phones and mobile devices. The entire site will be fully optimized for mobile later this spring, making it more efficient for fans will smartphones and tablets to access what they want.

Pippinsbaseball.com was built and hosted by the leader in sports franchise websites, Infinity Sports. They also have created website for other West Coast League team including the Walla Walla Sweets.

Tickets are now on sale for the 2014 season, including full-season and partial-season packages, as well as select team merchandise. Those interested in being part of something great from the start are asked to contact Noel Zanchelli at 509-575-8304or by email at noel@pippinsbaseball.com.