PRESS RELEASE – After three months of fan voting, community feedback and internal design work, the newest West Coast League (WCL) franchise will take the field in 2014 as the Yakima Valley Pippins. The team also announced that Selah native Marcus McKimmy, the head coach of the Yakima Valley Community College baseball team, would lead the team as the inaugural manager. The announcement was made in front of more than 800 students, faculty and staff at Selah Intermediate School, in Selah, WA.

“It is an exciting day!” said Pippins director of operations Noel Zanchelli. “It has been such a pleasure to work within the community to develop these important first steps, and I look forward to continuing these efforts as Marcus and I work together to build a winning team that the whole region can be proud of.”

McKimmy, a former player in the WCL with fellow WCL East division member Wenatchee, played collegiately at Columbia Basin College (2005-06), San Jose State (2007) and Gonzaga (2008) after prepping at Selah High School. While at Selah, he led the Vikings to two Washington state Final Four appearances, finishing third in the state in both 2001 and 2004. His career in the WCL garnered recognition in 2006, as he was an All-WCL Honorable Mention performer for the Applesox. He took over the head job at YVC this past season, and led the Yaks to a third-place finish in the NWAACC with a 33-19 record.

“Marcus’ experience in the WCL was an important factor in hiring him,” said Zanchelli. “He has had success at every level of the game, and I look forward to doing all I can to help him lead the Pippins to a WCL Championship.”

“I look forward to Opening Day,” said McKimmy. “I am excited to be a part of the Pippins taking the field for the first time in front of friends and family in my hometown who have helped me find some success in this game.” 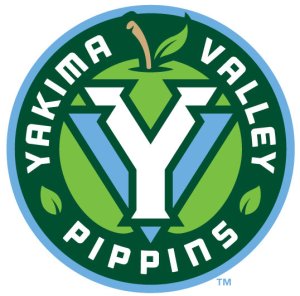 The Pippins brand features vibrant colors that reflect those found in the sunshine, majestic mountains, and rolling farmlands of the Yakima Valley. Legends Green, Pippins Green and Columbia Sky Blue are a strong message that Yakima Valley is a community and club that will create a new standard in the WCL. The brand was developed by Studio Simon, the leading brand development studio in all of baseball. Studio Simon principal Dan Simon was able to capture the vision and heart of the Yakima Valley throughout the entire process, working hand-in-hand with Zanchelli and Pacific Baseball Ventures COO Zachary Fraser to create a brand that is unique to the Yakima community.

“Dan is one of the greats in the game at creating brand identities that are truly that – identities – not just logos,” said Fraser. “We look forward to integrating this brand throughout the entire fan and player experience at Yakima County Stadium.”

The team name is a nod to the past, the present and the future of the game in the Valley. The past lends reference to the Pippins Baseball Club that represented the community from 1937-1941 as a member of the Western International League. The present is captured with the apple playing a prominent role in the presentation of the brand and across the primary, secondary, and alternate marks, just as the apple industry continues to play a vital role in the lives of many in the region. The future is found in colors that draw attention to the bright future that the Yakima Valley is poised to experience, both on and off the baseball diamond. Additional brand elements, including home, road, and alternate uniforms and the team mascot, will be released in spring of 2014.

Tickets are now on sale for the 2014 season, including full-season and partial-season packages, as well as select team merchandise. Those interested in being part of something great from the start are asked to contact Noel Zanchelli at 206.271.7820 or by email at noel@pippinsbaseball.com. The Pippins offices and team phone lines will be fully functional by January 2014, and a team store, stadium improvements and other fan-friendly amenity projects will begin in early spring 2014.

The West Coast League has developed into one of the best collegiate wood-bat leagues in the country, as the nation’s top collegiate baseball players are drawn to the beauty and strong communities of the Pacific Northwest. Collegiate wood-bat leagues allow college players develop their skills in professional settings and stadiums without sacrificing their college athletic eligibility. Players such as Jacoby Ellsbury(centerfielder for the 2007 and 2013 World Series Champion Boston Red Sox), Jeff Francis (pitcher for the 2007 National League Champion Colorado Rockies), and Chris Davis (2013 AL Homerun Leader)  began their careers in the West Coast League. For more information, please visit www.westcoastleague.com.

Pacific Baseball Ventures, LLC is a group of civic-minded individuals with strong ties to the Columbia Valley, Yakima and to the game of baseball. PBV will strive to provide their fans, sponsors, business partners, and investors with the very best in competitive baseball and entertainment, including atmosphere, comfort, food & beverage, safety, competition, fun and value. PBV also owns and operates the Walla Walla Sweets of the WCL.