PRESS RELEASE – The IronPigs will don a powder blue and burgundy retro mesh jersey during Sunday home games this season, paying homage to the Phillies’ tradition-rich teams of the 1970s and 1980s and marking the first significant uniform change since the IronPigs debuted in 2008. 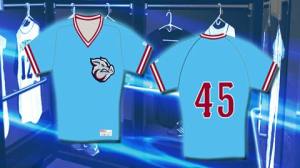 IronPigs 2013 Summer Jersey was inspired by the Phillies of the 1970’s.

The new look replaces the previous Sunday top – a white, sleeveless jersey that was accompanied by a separate brick red athletic T-shirt underneath. The official Sunday Game Cap is unchanged and remains the only two-toned cap in the fleet, with a brick red crown and a furnace blue bill.

“This is an iconic color scheme and one that IronPigs fans and Phillies fans collectively adore,” remarked IronPigs General Manager Kurt Landes. “We think our fans are going to squeal over this fresh new look!”

This pullover jersey features the primary IronPigs logo emblazed on the left chest to modernize the classic powder blue and burgundy look.  Its mesh composition promotes breathability and provides additional comfort for players and fans alike.

Some of the great figures in Phillies history have worn the “powder blues”, including the likes of Mike Schmidt, Steve Carlton, Tug McGraw and Larry Bowa. This color motif highlighted an era in which the Phillies went to the postseason in six of eight seasons beginning in 1976 and won their first World Championship in 1980.

The IronPigs are slated to wear the new pullover on ten occasions in 2013, including during the club’s first homestand of the year on Sunday, April 7, against the Syracuse Chiefs at Coca-Cola Park.

Pre-orders of the brand-new Sunday jersey replica by Majestic Athletic are now being accepted at the Majestic Clubhouse Store or online at www.ironpigsbaseball.com with an initial shipment scheduled by the end of next week (March 29).

Single-game tickets for the 2013 season presented by Capital BlueCross as well as the Gildan Triple-A National Championship Game are available now by visiting ironpigsbaseball.com, by calling (610) 841-PIGS (7447) or at the Coca-Cola Park ticket window during normal business hours.