Spinners to Become Lock Monsters (For One Night)

PRESS RELEASE – The Lowell Spinners are bringing back the Monster. The Class A Affiliate of the Boston Red Sox, announced plans for a Lowell Lock Monsters Night at LeLacheur Park, set for Thursday, August 15 when the team ironically takes on the Vermont Lake Monsters.

The Lock Monsters brought professional hockey to Lowell in 1998, two years after the Spinners made their move to Lowell. The team played as the Lock Monsters through 2006 when the team was purchased by the New Jersey Devils and renamed the Lowell Devils. The team relocated to Albany, NY following the 2009-2010 season. 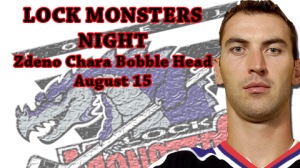 As part of the night, the Spinners will change their team name for the night to the Lowell Lock Monsters, donning Lock Monster style uniforms which will be auctioned off the players’ backs following the game to benefit Lowell Spinners Charities. In addition, the team will salute one of the best players to ever wear a Lock Monsters uniform, as the first 1,000 fans will receive Zdeno Chara Lowell Lock Monsters Bobble Head dolls.

“The Lock Monsters were a vital part of the rejuvenation of Lowell,” said Spinners President and General Manager Tim Bawmann. “They had such a loyal and passionate fan base, many of whom were similarly Spinners fans, that when we posed a question about the Lock Monsters on the Spinners’ Facebook page, the response was overwhelming. We look to salute those fans and the Lock Monsters with this great night.”

The Spinners are currently making efforts to locate the beloved mascot, Louie the Lock Monster, with the Spinners’ own Canaligator taking a break from his winter vacation to help locate his friend Louie.

“Louie was always such a great friend,” Canaligator said through a translator. “I’m sure his moves have slowed in retirement, but I’m happy to help bring him out of retirement for this special night and hopefully he’ll want to hang around even longer.”

In addition to Louie, the Spinners are also trying to locate former Lock Monster players to attend the game and re-connect with the fans they thrilled.

Tickets for Lock Monsters Night are currently available through the Premium Mini Plan package at http://www.LowellSpinners.com, which guarantees the holder a Chara bobble head. Individual tickets will go on sale in mid-March.