PRESS RELEASE – The Hot Stoves of baseball have never blazed like this. The off-season has been quite busy for the Buffalo Bisons and their new parent club, the Toronto Blue Jays. A great new partnership has been punctuated by an exciting new logo for the Herd, the return of a championship manager in Marty Brown and the fantastic acquisitions that have made the Jays a serious contender for a World Series Championship in 2013. 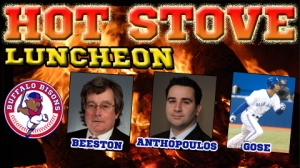 Gose will take part in an autograph session immediately after the luncheon. The event will also include the team’s New Uniform Unveiling as fans will see for the first time the Bisons new home, road and alternate jerseys as well as their official on-field caps. Also,

TICKETS ARE ONLY $25 and include a fantastic buffet meal prepared by the Adam’s Mark Hotel beginning at 12:00 p.m. Tickets are on sale now and can be purchased by calling the Bisons at 846-2011 or sending an email to info@bisons.com. Tables of eight can be reserved for only $200.

Beeston has served as President and Chief Executive Officer of the Blue Jays since October of 2009 and was the Blue Jays first employee in 1976. Anthopoulos is entering his fourth season as Blue Jays General Manager and has made several key acquisitions for Toronto this off-season, including a trade for former Bisons pitcher and 2012 National League Cy Young Award winner, R.A. Dickey.

Gose, 22, split the 2012 season with the Triple-A Las Vegas 51s and the Toronto Blue Jays and hit a combined .268 with six home runs, 54RBI, 47 extra-base hits and 49 stolen bases. He stole 70 bases as an Eastern League All-Star with Double-A New Hampshire in 2011, the second-highest total in the minors that season.