PRESS RELEASE – The Peoria Chiefs have unveiled their new look for the 2013 season with three new jerseys and three new hats as the team ushers in a new era and their renewed affiliation with the St. Louis Cardinals. Hats are currently for sale in the Online Store

“These three jerseys and hats give the Peoria Chiefs identity while also celebrating the rich history and tradition of the St. Louis Cardinals,” Chiefs President Rocky Vonachen said. “Our fans will enjoy the different combinations of hats and jerseys the players can wear during the 2013 season.” 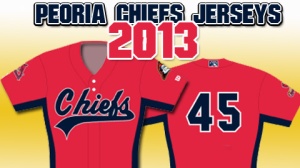 The 2013 batting practice jerseys will also serve as an alternate Chiefs jersey and feature the most changes from past jerseys. The BP jerseys will be Cardinal red with Chiefs across the front in navy with white outline. The jersey also includes navy blue inserts up the side and sleeve. The numbers on the back are also navy with white outline and the BP jerseys are the only of the three to not have numbers on the front. All three jerseys are made by Wilson and have the Chiefs logo on the left sleeve and the Cardinals “Bird on the Bat” logo on the right sleeve.

The Chiefs will also have three on-field New Era hats for the 2013 season. The main game hat will contain the same Chiefs head logo as in the past but the color of the hat changes to a darker navy blue. A new alternate hat is also navy blue with a red bill and features the letters “PC” in red cursive with white outline. The batting practice hat is all red with the regular hat logo.

All three hats are currently available in the Firehouse Team Store in a variety of fitted sizes. Jerseys will arrive later in the offseason. The team store at Peoria Chiefs Stadium is open from 9:00 a.m. to 5:00 p.m. Monday through Friday and fans can also purchase the new hats plus a variety of other Chiefs items through the Online Store

See the jerseys and the hats.

2 responses to “Peoria Chiefs Get New Caps, Jerseys for 2013”