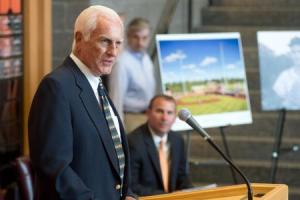 “I’ve been looking forward to this for a long time,” said Mr. Jim Perry. “This is a very special place for my wife and I. We came to Campbell College, now Campbell University, a long time ago. We met here. The good Lord above has given us the ability and the opportunity to give back and help Campbell University.”

“It’s a great day and I’m proud to be the head baseball coach at Campbell,” said CU head coach Greg Goff. “To see these young men who came here with the belief that this was going to happen one day and the belief in our coaching staff and the administration. Every day I go out to the ball park and see this process move forward. I just want to say thank you all the people that made this day happen. The opportunity for our stadium to be named after Mr. Jim Perry is a great honor. Not only was he a great pitcher, but he is a great man.”

“Thank you to Jim and Daphne Perry and to everyone who made this day possible,” said Dr. Dwaine Greene, Vice President for Academic Affairs and Provost. “What is happening today is something that is helping an entire university. There are many people inside and outside of this room who have waited for this day for a long time. We are blessed to be here and celebrate this wonderful day.”

“Thank you Jim and Daphne Perry, and thank you to everyone who made this stadium possible,” said Campbell Athletics Director Bob Roller. “Coach Greg Goff gets a great amount of credit for this for working tirelessly on this project. We look forward to enjoying many games at Jim Perry Stadium.”

Perry Stadium will feature total seating for 630, including 310 chair-backed seats, plus bleacher-backs and disability access. The new grandstand will span from dugout to dugout.

The 1970 Cy Young Award winner, Jim Perry attended Campbell from 1956-59. He then went on to play professional baseball for 17 years in the American League after signing with the Cleveland Indians organization.

Mr. Perry will also be recognized at half-time of tonight’s 7:00 p.m. men’s basketball game when the Camels take on Northwestern State.

Campbell began renovations in 2011 with phase one of the process, upgrading the facility with a new entrance gate and ticket booth, restroom and concession facility, exterior wrought iron fencing and improved exterior landscaping.

Progress continued in October of 2012 with the demolition of the existing grandstand, press box and former concession stand.

Campbell’s return to the Big South Conference was highlighted by the club leading the league in hitting with a .314 batting average en route to a 15-9 second place regular season finish. The Camels also boasted a 23-3 start and an 18-game winning streak, both marking the best in CU program history.

Read more here from the NewsObserver.com.