PRESS RELEASE – It’s a new era in Lexington Legends baseball, and now the Legends have a new look. The Legends, who became a class A affiliate of the Kansas City Royals in September, unveiled their new identity program Thursday evening in downtown Lexington. The new identity is part of a six-month creative overhaul of the Legends brand, which was planned before the affiliation change.

[View news clip of the unveiling here from WKYT]

“It’s been an exciting off-season so far, and this will only add to it,” said Legends General Manager Seth Poteat. “It’s time to let everyone see the new look for the Legends, and we think our fans will love it.”

Fans will see an old-timey “Big L” gripping two bats over a classic “Legends” script and white farm fences. Caps worn by the Legends for home games will feature a stone-chiseled “LEX” in reference to the historic dry stone walls that line many of the roads in the Bluegrass and a modernized “L-State” (a letter “L” in which the base is an outline of Kentucky). Big L’s famous mustache will appear on the road caps, and the “stache” will be part of several new mustache-themed fan experiences. Big L will continue to represent the Legends as he has since the team began play in 2001. 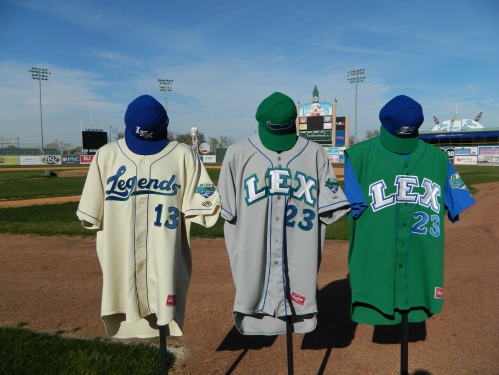 “We’re not going from A to Z in changing the look,” said Legends President and COO Andy Shea. “But after 12 years, it was time to revitalize it, and we’re really pumped about it.”

Continuing a tradition of making colors representative of Lexington and Kentucky, the new team colors are Regal Green, Bluegrass Blue and Classic Cream. The Legends are the first professional sports team to use the green-blue-cream combination. 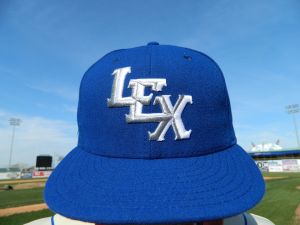 The redesigned Classic Cream home uniforms feature Bluegrass Blue trim with “Legends” spelled out across the chest. The new blue home cap features the “LEX” logo. On the road, the club will don traditional gray uniforms with “LEX” displayed across the chest, and Regal Green caps featuring a new mustache logo. Fans got their first look at the new home uniform when it was worn by the Legends “Big L” as rappelled from the 410-foot-tall Lexington Financial Center Thursday evening as part of a fundraiser for the Bluegrass Council, Boy Scouts of America. Other uniform styles and caps were unveiled a few minutes later.

The Legends look was brought to life at Brandiose in San Diego, which has been a branding partner with numerous professional sports teams, including the Cincinnati Reds. Partners Jason Klein and Casey White invented the first glow-in-the-dark on-field cap for the Casper Ghosts and the first on-field rally cap for the Altoona Curve. They also created top-selling logos for the Reds, the Richmond Flying Squirrels and the Lehigh Valley Iron Pigs.

Klein and White came to Lexington in April 2012 to meet with fans, staff and community members to learn about the history and personality of the Legends and Lexington. In addition to the logos, uniforms and a refreshed look for Big L, Brandiose also is creating enhancements for the 2013 fan experience.

“The new identity honors the legendary race horses, ballplayers and community members are born in Lexington,” said Klein. “Fans will love all the new mustache references and all the fun new ideas in store for this off-season.”