PRESS RELEASE – The 2012 season for the Pensacola Blue Wahoos has been unbelievably eventful. This is the first year of affiliated Minor League baseball in the city, so the team was brand new. One of the sport’s most electric players, base-stealing phenom Billy Hamilton, is playing for the Blue Wahoos. The team has drawn a remarkable 300,000 fans this year. Even a hurricane came calling in the season’s final week.

And now there’s another noteworthy event. Pensacola’s new ballpark has been named Ballpark of the Year for 2012 by Baseballparks.com. Site webmaster Joe Mock made the announcement today. It’s the 13th straight year the site has presented such an award. 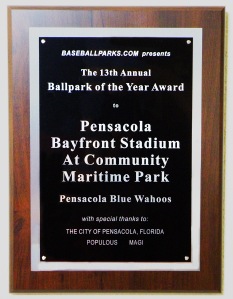 The honor is awarded annually to the new baseball stadium with the best combination of superior design, attractive site selection and fan amenities. The plaque representing the award will be presented by Mock at a Blue Wahoos home game in April of next season.

The facilities vying for the award this year include all new parks in pro baseball, and those that were essentially rebuilt. The three major contenders were all in the state of Florida, and interestingly were all designed by the same architecture firm.

“The architects at Populous should be very proud of their facilities that opened this year,” Mock said. “They designed the incredibly impressive spring-training park and complex in Lee County, Florida for the Red Sox. They were also the architects for one of the most ambitious sports facilities ever built, Marlins Park. But even though it was the smallest of their three projects, I think Pensacola’s ballpark is the best.”

Aaron Noll, one of the Populous architects who worked directly on the facility, noted that the new park “has become a proud icon of the city of Pensacola. With the best outfield view in all of minor league baseball and a top-notch operations staff, this ballpark will continue to serve its city well for years to come.”

Added Populous Principal David Bower, “This is a success story of how to create a great ballpark unique to the Pensacola community while being mindful of the city’s vision for future economic development.”

And Populous (formerly known as HOK) is no stranger to this award. This is their seventh win, the most by any architecture firm.

“We are very grateful for the high praise from Baseballparks.com,” said Bruce Baldwin, the Blue Wahoos’ team president. “Considering the other stadiums that have opened this season, we are thrilled to receive this award. It is truly an honor. This is a testament to the hard work and dedication to this project by our owners Quint and Rishy Studer and the confidence and support of this stadium and the vision by the Community Maritime Park Associates, the City of Pensacola and its citizens. I don’t consider this an award for the Blue Wahoos, but one for all of Pensacola and Northwest Florida.”

“I’m just thrilled to death to learn that one of our parks has earned this honor,” said Lori Webb, President of the Southern League. This is the first time a park from this league has won the award. “It’s amazing how far the team in Pensacola has come in such a short time, reaching 300,000 in attendance in their first year and now winning this award. Their ballpark is certainly the jewel of the Southern League right now. And the fact that it’s right on the water gives fans a really great view.”

Indeed, part of the reason Pensacola’s park won this year’s award is its location. “This is one of the most inspired site selections ever,” observed Mock. “It’s right on Pensacola Bay, and the views from within the ballpark are truly breathtaking. And to think that this site used to be an eyesore with rusting, abandoned petroleum tanks is, frankly, unimaginable when you look at it now.

“New parks are usually appreciated by the local residents,” Mock continued. “But I’ve never seen a park have such a huge impact on its market. You can just feel the pride that Pensacola residents have about their fantastic new facility. What a success story this is.”

This is the 13th year that Baseballparks.com has honored a new park with this award. Pensacola Bayfront Stadium now joins some select company, as past winners include AT&T Park in San Francisco, Pittsburgh’s PNC Park, Huntington Park in Columbus, Ohio and last year’s winner, Salt River Fields in Arizona. The complete list can be found here: http://www.baseballparks.com/BallparkOfYrLaunch.asp.