The Toronto Blue Jays and Double-A New Hampshire Fisher Cats (Eastern League) have extended their Player Development Contract (PDC) until 2014.  There is also talk that the Blue Jays might be eyeing the Buffalo Bisons (International League) to replace Las Vegas 51s as the team’s Triple-A affiliate.  The Bisons are currently an affiliate of the New York Mets.  Read more here.  Thanks to John Cerone for the link.

What does this do for Ottawa’s prospects for Double-A Ball?  We don’t think it’s some dramatic final nail in the coffin as it’s being portrayed by some sources, provided the effort by Beacon Sports of Boston is a legitimate one predicated on the reality that the group can actually deliver on a promise to bring a Double-A franchise to the Capitol City.  As we have said before, if a team is secured, it will be a Blue Jays affiliate — at some point.  But if Ottawa doesn’t get a team, any argument that the effort failed because the Blue Jays extended their PDC with the Fisher Cats is off base and provides nothing more than an excuse for city officials and Beacon Sports.

PRESS RELEASE – The New Hampshire Fisher Cats and the Toronto Blue Jays today announced a two-year extension of their Player Development Contract (PDC), ensuring the Fisher Cats will remain the Blue Jays’ Double-A affiliate through the 2014 season. Toronto has been New Hampshire’s Major League parent club since the Fisher Cats began play in Manchester in 2004. 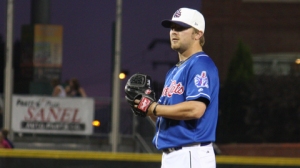 “We are very pleased to continue our relationship with the Blue Jays,” said Art Solomon, Fisher Cats owner. “Toronto continues to be a top-notch organization that consistently supplies us with high-character players and competitive teams on a yearly basis. We look forward to contending for additional Eastern League titles in the years to come.”

During the first eight-plus seasons with the Blue Jays, the Fisher Cats have won two Eastern League championships, in 2004 and 2011. The partnership has seen 55 players make their Major League debut after playing for the Fisher Cats, including Evan Crawford, Drew Hutchison, and Yan Gomes in the 2012 season. Current Blue Jays starting pitchers Ricky Romero, Kyle Drabek, and Henderson Alvarez are among the ten former Fisher Cats on Toronto’s active roster.

“The Blue Jays are very pleased to be extending our working agreement with the Fisher Cats,” said Blue Jays Director of Minor League Operations Charlie Wilson. “The Fisher Cats represent the best of Minor League Baseball with state-of-the-art ballpark and facilities, passionate baseball fans, and a great front office led by Art and Rick. This is a great arrangement for us for another two years.”

“Working with the Blue Jays has been a pleasure for our team,” added Fisher Cats President Rick Brenner. “The players provide our fans with excitement on the field while representing the Blue Jays, the Fisher Cats, and themselves with class in the community. We look forward to two more great years with Toronto.”

In their ninth season with the Blue Jays, the Fisher Cats affiliate relationship with Toronto is second in length only to the Dunedin Blue Jays of the Florida State League.

The Fisher Cats continue their four-game series with the Portland Sea Dogs, Double-A affiliate of the Boston Red Sox, with a doubleheader tonight. First pitch is at 6:05. The first 1,000 fans will receive an Eastern League Championship T-Shirt courtesy of FairPoint Communcations. For tickets, visit http://www.nhfishercats.com.