“We are thrilled to continue our great relationship with the Indians and look forward to working together to produce a quality product both on and off the field,” stated Scrappers General Manager, Jordan Taylor. “The Indians continue to show a commitment to building a strong farm system, giving local fans the opportunity to see future major league talent.” 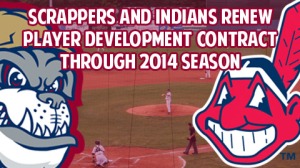 “We are excited to extend our relationship with the community of Niles and the Mahoning Valley Scrappers,” said Cleveland Indians Vice President of Player Development Ross Atkins. “We couldn’t be more pleased with the support from HWS Baseball and the Mahoning Valley front office. Having a community with such Cleveland Indians pride just one hour to the east of Progressive Field benefits our players immensely. We look forward to Mahoning Valley producing even more core players for the Indians like CC Sabathia, Victor Martinez, Lonnie Chisenhall and Jason Kipnis.”

The Mahoning Valley Scrappers are the Class-A affiliate of the Cleveland Indians and play in the New-York Penn League. The Scrappers home opener is June 20 against the Jamestown Jammers, affiliate of the Florida Marlins. Season tickets, suite rentals, and group outings are currently on sale. For more information contact the Scrappers at 330-505-0000.